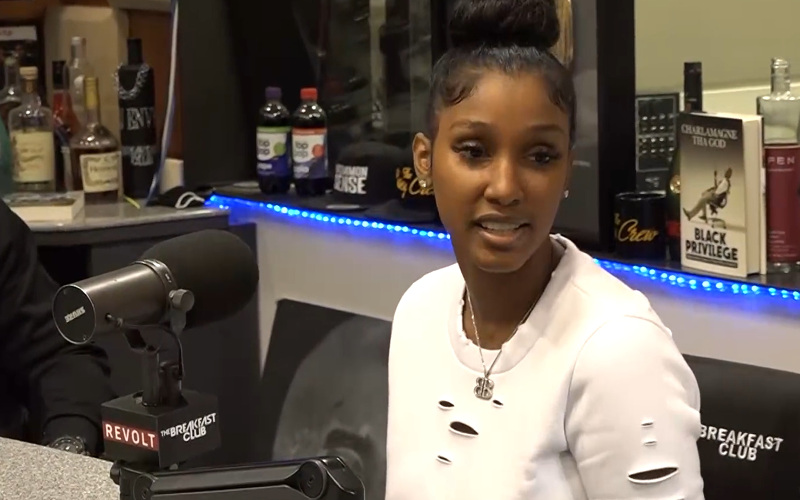 Bernice Burgos is tired of her name being dragged on Twitter and being thrust in the middle of the drama between T.I. and Tiny Harris. She attempted to set the record straight on The Breakfast Club, but did herself no favors.

Burgos sat down with Breakfast Club hosts Charlamagne tha God, DJ Envy, and Angela Yee on Wednesday (Jul. 26) for nearly an hour. She discussed everything from her career to rumors, her dating life, and her plastic surgeries.

However, what we all really wanted to know about was her relationship with Tip and what role (if any) did she play in his ongoing divorce from Tiny. It has been rumored that she was T.I.’s side chick and has engaged in a ruthless social media feud with Tiny, who once referred to Burgos as a “pass around b*tch.”

Burgos revealed on the radio show that she felt bad about her social media posts against Tiny, which have since been deleted.

“I was shocked with myself too. I’m very disappointed with what I did. I’m not saying I regret it but I learned by being on social media. Social media will sometimes put you in a place where you have to fight with people that you don’t know. [I replied] because I was listening to social media, so many lies, so many you this, you that.”

She also states for the record that she was never in a relationship with T.I. She says it was always and only about business when it came to the two of them.

Another particular moment of the interview caught social media’s attention and went viral. The former “video vixen” wants to shed that title and confronted host Angela Yee for (allegedly) referring to her as such during a recent interview with Lala Anthony. The only problem is Yee never called Burgos a “video vixen” and had the receipts to prove it.

Anthony is executive producing a show a called Goal Diggers, which “follows former video vixens, strippers and Instagram models attempting to flip their online fame into bona fide businesses as entrepreneurs.” Burgos is part of the show.

You can watch Bernice Burgos’ full Breakfast Club interview below: