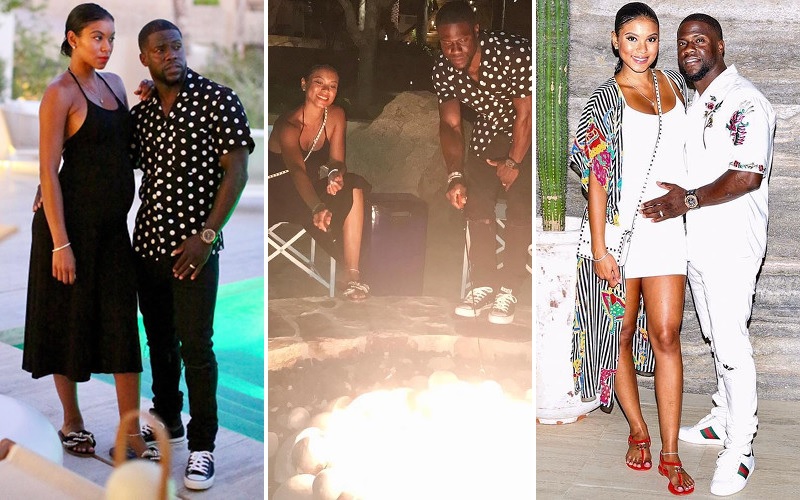 What cheating scandal? Amid allegations of cheating on his pregnant wife, Kevin Hart and Eniko Parrish just went on a romantic getaway to Cabo. And the married couple made sure we all knew about it.

Hart and Parrish, who is six months pregnant, hopped on a private jet to Cabo, Mexico for a “babymoon” before the couple’s first child together arrives. The trip also comes weeks away from their first wedding anniversary in August.

The couple was joined by Ludacris and a few other friends and family.

Hart and Parrish both posted this photo of the travel group standing beside a private plane. “Great times with great people… #LiveLoveLaugh #Family #Blessed,” the comedian wrote on his post.

Hart and Parrish posted several other photos of their Cabo getaway, including feasting on delicious foods, hanging out with friends, dancing together, and making s’mores for the first time together. “Creating memories that’ll last forever,” Parrish wrote on one of her IG posts.

Friends/Family Living Loving & Laughing….Please excuse @spankhorton posture in this picture. I've never seen a person look more uncomfortable in my life. Why did he arch his feet….Why is he smiling like somebody's nasty uncle. What happened to his knees. He's honestly embarrassing 😂😂😂😂

There's a first time for everything, making s'mores together was one of them. Creating memories that'll last forever. #thelittlethings HARTS ♥️

It was just last week that there was speculation that Hart was cheating on his wife. Radar Online caught the comedian leaving a Miami nightclub with rising Latin pop star Monique “MoMo” Gonzalez at around 5 am. The two then stayed in a Lexus for upwards 20 minutes. “It was obvious they were up to no good,” a source told Radar.

Hart laughed off the cheating scandal on Instagram, calling it “BS.” A source also tells People that while Hart has some friends that are “players” and he is often “surrounded by that atmosphere,” the comedian “is very committed to his wife and their marriage.”

It’s possible that Kevin Hart actually didn’t cheat on his wife, but he and Eniko sure are doing the most to prove they’re a happy couple with these Cabo photos.