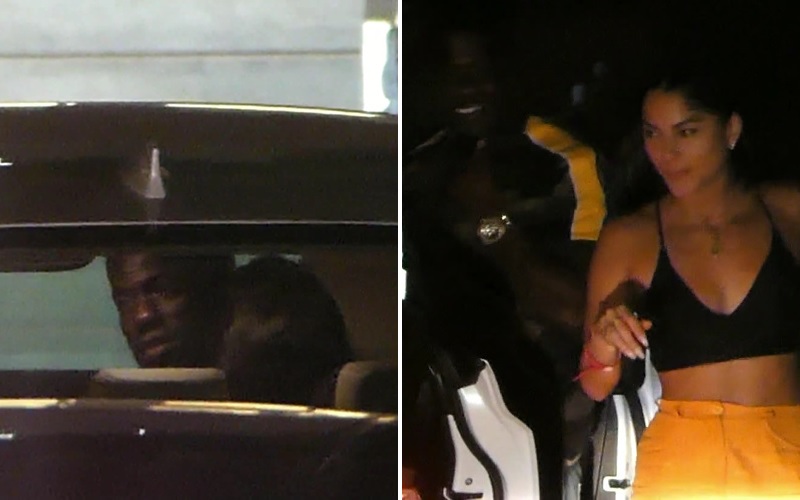 He’s not even a year into his marriage and Kevin Hart may already have a side piece. The comedian was recently caught canoodling for 20 minutes with a woman that is not his wife.

On Wednesday (Jul. 19), Radar Online published photos and a 3-minute video which show Hart with an unidentified woman in his car outside of his luxury Miami beach hotel. And whatever went down, it didn’t look too innocent.

According to the site, Hart and the brunette were in the car for 20 minutes with him even getting into the passenger seat to get closer. The video was captured July 3rd at around 5 a.m.

“It’s obvious they were up to no good. She kept looking over her shoulder and Kevin was pop-eyed when another guest walked by.”

Hart and the woman had been partying together at LIV nightclub, celebrating his birthday during the “All-Star Celebrity Birthday Bash” thrown in his honor. The actor turned 38 on July 6 and has been on a cross-county bar crawl celebrating.

Meanwhile, Hart’s wife, Eniko Parrish, is currently pregnant with the couple’s first child (his third). Parrish, who recently shared a photo of her baby bump on Instagram (see below), was at home while Hart was partying with the mysterious brunette.

A source tells Radar Hart’s friends are shocked he would cheat on his pregnant wife.

“With his wife at home pregnant, Kevin’s behavior is way out of line. His friends are in total shock. Eniko needs to be stress-free and feeling safe and secure. It’s disgusting that Kevin is doing this to her.

“Even though Kevin has a history of cheating it’s still shocking that he seems more interested in chasing women than spending time with his wife.”

Hart admitted that he cheated on his first wife, Torrei Hart, with Parrish. Their divorce was finalized in 2011.

The comedian is naturally laughing off the “BS” video and cheating allegations. Hart posted a meme of himself laughing on Instagram on Wednesday (Jul. 19) that reads:” At the end of the day, you just gotta laugh at the BS.” He captioned the meme with “#LiveLoveLaugh… SMDH”

A rep for Kevin Hart has denied there was any wrongdoing with the unidentified woman.