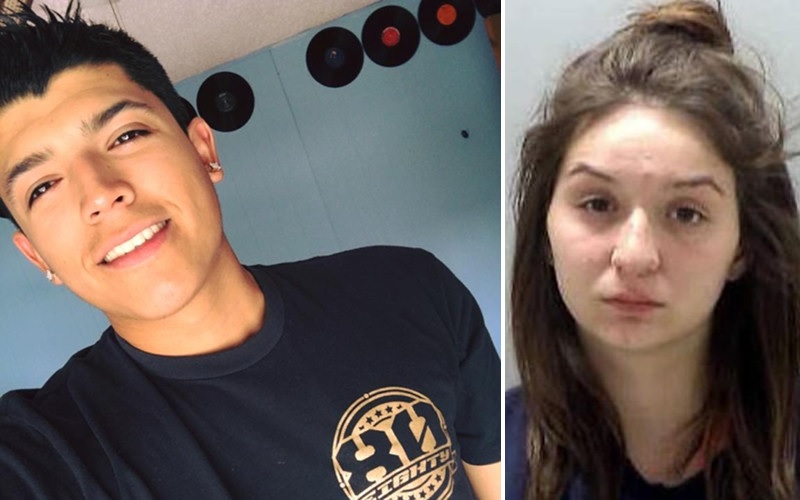 Seeking social media fame resulted in the death of a 22-year-old man and the arrest of his pregnant 19-year-old girlfriend. Pedro Ruiz of Minnesota was shot and killed by Monalisa Perez while recording a stunt for YouTube.

Pedro died on the scene and Monalisa was arrested and charged with second-degree manslaughter.

Here are a few things you need know about Pedro Ruiz, Monalisa Perez and the YouTube stunt that went fatally wrong.

Pedro Ruiz, 22, died after his 7-months pregnant girlfriend accidently shot him while filming a YouTube stunt. Around 6:30 p.m. in rural Halstad, Minnesota on Monday (Jun. 26), a call was placed to the Norman County Sheriff’s Office. According to the police report, Monalisa Perez had accidently shot her boyfriend, Pedro Ruiz, in the chest while filming a stunt for YouTube.

Pedro was holding a 1.5-inch encyclopedia in front of him, hoping the book would stop the bullet. Standing nearly a foot away from him, Monalisa pulled the trigger. However, the stunt went tragically wrong.

First responders attempted to save the 22-year-old’s life, however, he died on the scene while waiting on a helicopter.

A Desert Eagle. 50 caliber pistol, a powerful handgun, was found on the scene. The shooting was captured on two cameras and police have confiscated the footage as evidence. Police say they will not release the footage.

Monalisa, currently seven months pregnant, was initially charged with reckless discharge of a firearm. She was released on $7,000 bond on Wednesday (Jun. 28) and was charged with second-degree manslaughter, a charge with a 10-year maximum prison sentence, a fine up to $20,000, or both. Her next court appearance in July 5th.

Pedro had been eager to perform the dangerous stunt in order to go viral and gain social media fame. According to family members, the couple of six years was seeking fame from their YouTube videos. Hoping to achieve such notoriety, Pedro had been wanting to do this particular stunt for a while.

Hours before Pedro’s death, Monalisa teased the stunt on Twitter, noting that it was all Pedro’s idea, not hers.

With one camera on the back of a parked car and another on a ladder, Monalisa stood about a foot away from her boyfriend and pulled the trigger as he held a thick encyclopedia. The bullet went through the book and into Pedro’s chest.

Monalisa told authorities that she was hesitant to do the stunt, but was convinced after Pedro showed her a book that a bullet was unable to fully penetrate when he attempted the stunt for himself.

However, a family posted on Facebook that the previous attempt was much different than what Pedro and Monalisa did.

“He sent me a snapchat shooting a bookshelf of encyclopedias and said lets see how many books it would go through … it didn’t make it past the first book … but its different if you have 20 books stacked than just 1, dammit man i can’t believe it.”

Prior to the shooting, with the exception of one, the couple’s 18 posted YouTube videos only had between 200 and 3,000 views each.

Sadly, Pedro’s name did make headlines at the expense of his life. The viral news of his death has caused their YouTube video views to increase considerably, with their most recent post (uploaded hours before Pedro’s death) currently with over 1.1 million views.

The couple initially posted harmless family vlogs, but Pedro wanted to branch out on his own with more adventurous videos.

The couple has posted joint videos on Monalisa’s YouTube account, La MonaLisa, since March. The channel was meant to broadcast the couple’s daily lives.

Monalisa wrote on the channel’s about section:

“Welcome to our channel loves!! Our Vlogs will show you the real life of a young couple who happen to be teen parents. From highs to lows. Achievements to struggles. Join the fun, Follow our journey!”

A few of the videos posted captured the family going to the grocery story, revealing the gender of their baby, and pulling innocent pranks like Monalisa giving Pedro a doughnut topped with baby powder rather than powdered sugar.

However, some of the video showcased Pedro’s adventurous side such as climbing trees and performing stunts and pranks. Because of this, the couple was planning to branch out and have separate channels.

“We are In the process of making pedro a YouTube channel oh man is it going to be sweet! Lol. All the crazy stuff will be on his channel and mine will be our family life!!!!”

Their final video together, posted hours before Pedro’s death, was titled “Doing Scary Stunts at the Fair.” It was shot at a local fair the two attended with their 3-year-old daughter.

“Of course Pedro would be the one to try stupid things;),” Monalisa wrote when she shared the video on Facebook.

In the same video, the couple discussed internet fame and growing their number of subscribers. “Imagine when we have 300,000 subscribers,” Monalisa dreamed. “I told them, the bigger we get, I’ll be throwing parties,” Pedro added.

Family members say Pedro had been a thrill-seeker most of his life.

Pedro was raised by his aunt, Lisa Primeau, after his mother died when he was just 5, and he had a difficult relationship with his father. Primeau told the Star Tribune Pedro was always the family’s daredevil.

“We called him our little daredevil,” she said. Even as a child, he was “putting a dangerous twist on everything he did [like] jumping into the swimming pool from the top of the house, no hesitation. He was a crazy driver with go-carts.”

Primeau also added that Pedro liked and owned many guns.

Sharing a daughter and expecting a son, Pedro and Monalisa were deeply in love and excited to grow their family. By all accounts, the young couple were very much in love and had a simple life together.

They have been together for six years, had 3-year-old daughter named Aaliyah, and Monalisa is pregnant with the couple’s second child, a boy, who the couple decided to name Pedro as well.

Pedro was the provider for his growing family. He worked as an engineer for BNSF Railway and was studying to be a foreman.

“I wish they wouldn’t have done it. I wish he would’ve just done another prank. He was so young,” he’s aunt Claudia Ruiz said. “He had so much going for himself.”

Monalisa is a stay-at-home mom, but was growing her social media presence as a “family vlogger.” She also sold beauty, fitness, and health products online.

The family moved from their Fargo, North Dakota apartment to their house in rural Minnesota in December 2016. They were excited to grow their family and what the future held for them.

Monalisa wrote in an October post of a photo with her daughter:

“These are the moments I live for. My goal is to be able to be a stay at home family, enjoying every little moment, going on adventures, and being financially content! And I won’t stop until my dream becomes a reality!!! If you can dream it, you can achieve it. So what’s stopping you from joining my team and having a life you WANT!?”

Monalisa is expected to give birth in September.