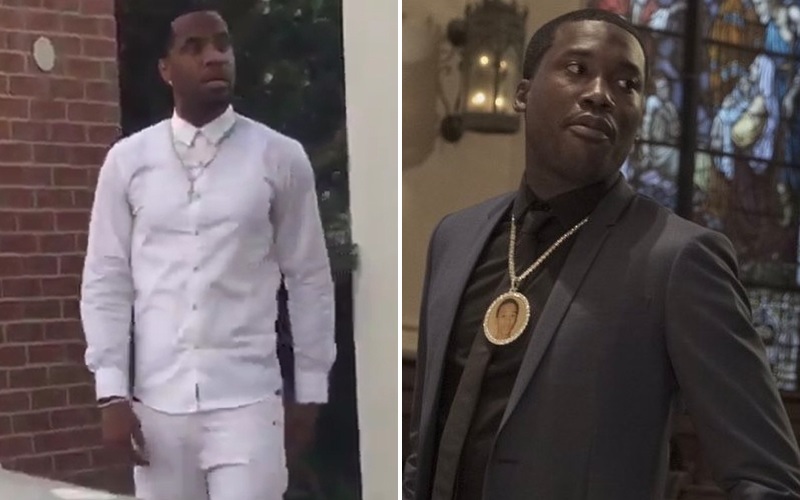 The beef between Nicki Minaj’s exes may have just reached epic proportions.

If we take Safaree’s word for it, the Love & Hip Hop: Hollywood star was just jumped by Meek Mill’s crew on the streets of LA.

In a now-deleted Instagram video that has gone viral, Safaree claims he was jumped by Meek and his crew after attending at a BET Awards weekend event hosted by DJ Khaled in Los Angeles on Friday (Jun. 23).

“I hopped out the whip, saw Meek, he hopped out and then I just got snuffed. N***as jumped me… Meek, you are the biggest p*ssy on this planet. You saw me, you ain’t do sh*t, you had your n***as jump me. One-on-one you can’t f*ck with me, so that’s why you had to do that.”

Safaree says he was jumped by multiple guys from all directions. He said Meek was too scared to step to him himself, so Safaree challenged him to meet one-on-one at some point during BET Awards weekend.

Another video, recorded after the alleged altercation, shows a fuming Safaree on the street shouting, “That guy’s a f*cking p*ssy!” The woman recording the video from a car explains, “He just got jumped! Damn!”

The viral videos got people talking and caused “Safaree” to become trending topic on Twitter. However, many questioned if a fight even went down, because at the time, video footage of an altercation was missing. And Safaree came out with no visible signs of being jumped, which he even noted in his IG post. “All white, I’m still clean, and I still got all my sh*t on,” he said.

Me trying to figure out how Safaree got jumped but his outfit looks like it was just pressed by the cleaners pic.twitter.com/diJsDnf8xe

So nobody got the meek and safaree fight on video pic.twitter.com/j67K6jPpY9

They're asking Meek if he threw at least a punch when his crew jumped Safaree pic.twitter.com/9v4aDjmrfT

So, Meek Mill had his boys jump Safaree & Safaree had not one scratch, rip, or wriggle on him? pic.twitter.com/mHX4xO8Ici

Not surprised Safaree ain't have a scratch on him after getting jumped, because this is how Meek fights smh https://t.co/7R638XjwgI

Later on in the day, The Shade Room shared shaky video footage from the alleged “jumping” incident. It’s hard to tell exactly what’s going on in the clip, but from the looks of it, Safaree was definitely “touched” by someone, though it’s not clear who grabbed him. You can also clearly see Meek Mill exiting his car before a group of men rush towards Safaree.

Meanwhile, Meek doesn’t seem too pressed over Safaree and his claims. The rapper doesn’t confirm or deny that his crew jumped the LHHH star, but he did seemingly address the situation on IG soon after Safaree’s initial post. He dismissed the accusations by writing:

“I wish I would pay attention to these homeless n#%gas”

Safaree and Meek and gone back forth with each other on social media for years due to their romantic connections to Nicki Minaj. Safaree has even claimed Meek was one of the main reasons the two broke up.

Maybe their beef finally came to a head (and blows). However, no one really knows what exactly went down.