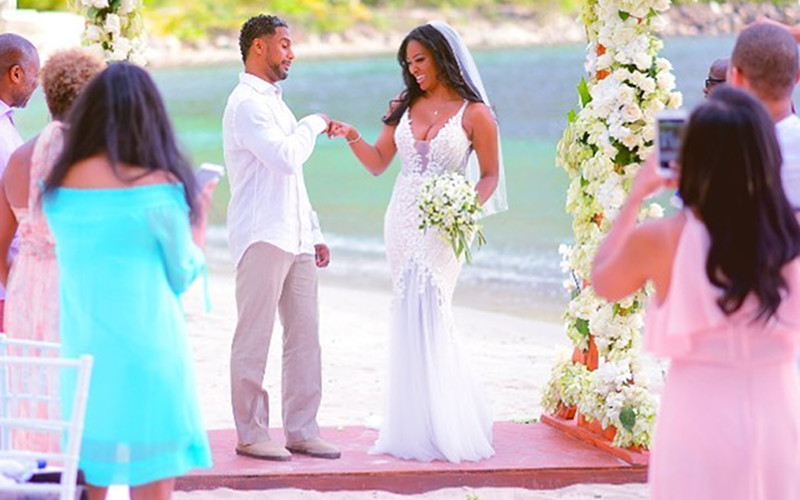 The mystery has been solved! Last week, we were all stunned to learn that Kenya Moore was a married woman. What was even more puzzling was that we didn’t know anything about her new husband. We didn’t have a name, an age, or even what he looked like — until now! The Real Housewives of Atlanta star posted the first clear photo of her hubby on Instagram and revealed his name. “Marc, you are the best man I have ever known,” she wrote. “Thank you for loving me unconditionally. My #rideordie #bonnieandclyde”

Here are a few things you need to know about Marc Daly. Marc Daly is a restaurateur. He is the owner of the restaurant SoCo in Brooklyn. According to its website, the restaurant serves a “mixture of cajun/creole, barbecue, and soul food dreamt up with everything else you can imagine.”

Former SoCo owner Malissa Browne confirmed to Radar Online the restaurant’s current owner and Kenya’s husband is one in the same. “I parted ways with SoCo, but Marc is the owner now. The wedding took us all by surprise,” she said.

A source tells MTO that Marc would often “shut down the back of his restaurant so that Kenya could eat in peace.”

Marc may also be the owner of another restaurant, Eleven Madison Park, also located in NYC. However, this has yet to be confirmed.

Marc Daly was previously in finance and was the Vice President of a Citibank branch in New York. Even so, Marc was listed as a Vice President of the Citibank Park Avenue office in NY as of late 2016. It’s unclear if he still holds that position.

The groom is believed to be 47-years-old and (reportedly) the father to at least one child. On Sunday (Jun. 18), Kenya wished her husband a happy Father’s Day on social media. We don’t think Kenya is pregnant (yet), so we can only guess that Marc is already a father. It has been rumored that he has adult children, but that hasn’t been confirmed.

If his kid(s) are reportedly of adult age, exactly how old is Marc? The groom has been described as “age appropriate,” as Kenya does not mind dating a little younger. Marc is believed to be 47 years old, with the Aries celebrating his birthday on April Fool’s Day (Apr. 1).

The newlywed’s relationship moved rather quickly, getting hitched after only 7 months of dating. The newlyweds previously met over year ago, but sparks didn’t exactly fly. The two reconnected in December 2016 and started dating. They only dated for 7 months before tying the knot, but Kenya believes she found her true love. “This man is the love of my life and I’m so happy,” she told People magazine.

“Since we reconnected you have been my everything, my one and only, my heart…I love you. #devotedwife #family #happyfathersday #truelove #bliss”

“A good man is hard to find but true love is even harder. I found both.”

Not to rain on a bride’s parade, but former SoCo owner Malissa Browne may have a different perception of Marc. When Radar asked if Marc is a “good man,” she responded, “I don’t want to say anything on what kind of guy he is. Let’s just say, ‘no comment.’”

Hmmm… I guess you can take that however you want.