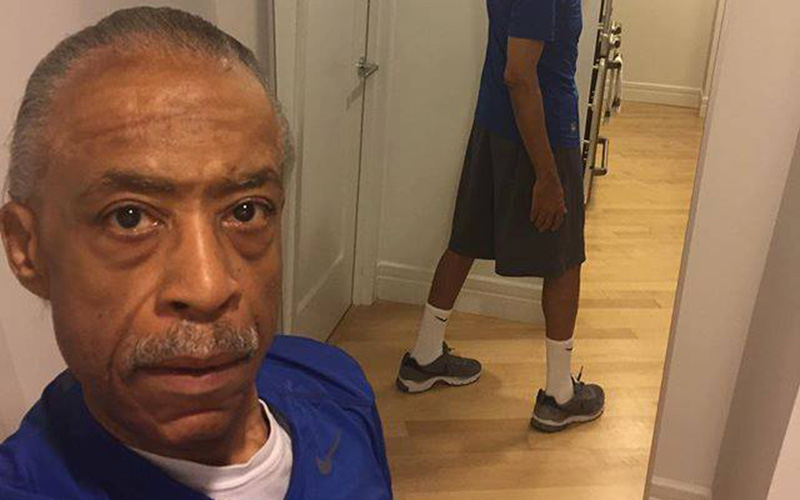 Al Sharpton kicked his Father’s Day off by taking a workout selfie in the mirror, which resulted in him being roasted endlessly all over the internet.

The famous civil rights activist and political commentator shared a photo of himself on Facebook and Instagram rocking a compression shirt and basketball shorts along with his plans for the day:

Happy Father’s Day!! Headed to workout at dawn, then I’m live on Politics Nation w/Al Sharpton at 8 am/et on MSNBC, then on my national radio show from 9-10 am, and then I preach the 9 30 and 11 30 am services at Metropolitan Baptist Church in Newark, NJ. Thank God for energy and purpose as I celebrate another Father’s Day. As you can see in the photo, Sharpton made sure he gave us a full view of his workout gear, and that’s what inspired the impromptu roast on social media:

You telling me Al Sharpton not only showing u men over 60 how to keep it tight but ALSO showing u women how to do a press and curl I'm shook pic.twitter.com/RFIdNq0t1v

Al Sharpton made sure you go the whole fit & both sides of the perm pic.twitter.com/PF6WOP4vsf

Al Sharpton look like a 12 year old in his P.E clothes for 3rd period. pic.twitter.com/tpRgUiZkvv

Al Sharpton look like he showing his progress through his physical therapy visits pic.twitter.com/6ggcJwH2tt

Al Sharpton got a wingspan like Durant. I'm HOWLING pic.twitter.com/j6MAl0YOHN

?? This looks like a 12 year old is wearing Al Sharpton's face for Halloween pic.twitter.com/R0J4BhpMFs

Al sharpton look like an emaciated version of the jumpman logo pic.twitter.com/rZC46t2g8b

Also, let the records show that this is NOT the first time Al Sharpton has used a mirror to make sure his selfie is juuuuust right:

look at Al Sharpton birthday selfie?????? somebody need to take his phone. he didn't even use the front camera??? pic.twitter.com/wqRalw5W0R

Can someone please tell Uncle Al that our phones have cameras on the front for this very purpose?