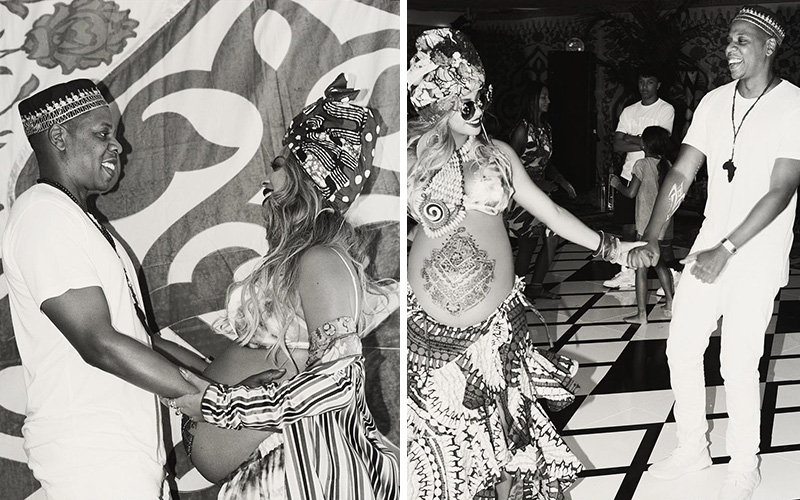 The Carter family has officially grown by two!

According to Us Weekly, “multiple sources” have confirmed that Beyoncé and Jay Z welcomed their twins “earlier this week.”

Showbiz 411 was the first to report the news on the Carter Twins’ arrival:

There’s a less than 1 percent chance we’re wrong but… Sources say that Beyonce gave birth to twins on Monday night or Tuesday morning in Los Angeles. That’s the reason Jay Z didn’t turn up on Thursday night for the Songwriters Hall of Fame induction in New York. He had his hands full. The source is good. Those kids are here. They’re going to Run this Town.

Adding some credibility to the reports is the fact that an unidentified woman was spotted outside UCLA hospital carrying a bouquet of flowers along with a card with “B & J” written on it, as well as pink and blue balloons with “Baby Boy” and “Baby Girl” written on them, possibly confirming that Beyoncé gave birth to a girl and a boy. An eyewitness said the woman walked into the front of the building, then got back into her car and drove into an underground parking lot. She emerged five minutes later without the flowers.

Additionally, black SUVs were seen leaving the couple’s rental home in Beverly Hills earlier this week, and on Thursday (Jun 15), Jay Z was spotted with Blue Ivy at the hospital.

As we previously reported, Twitter went into a frenzy amid news that Beyoncé had already given birth to the twins.

“My homegirl works at UCLA Hospital and she spilled some tea about my girl Queen Bey!” a source spilled to The Shade Room. “She told me that Beyoncé and her team showed up to the hospital and that they’re in the process of shutting down the whole 5th floor. She also said that they’re moving patients to another building.”

It’s only a matter of time before Beyoncé confirms the news herself with an Instagram post that will likely break her record of over 10 million likes (the most liked photo on IG is her February pregnancy announcement).

“We would like to share our love and happiness. We have been blessed two times over,” the photo’s caption read. “We are incredibly grateful that our family will be growing by two, and we thank you for your well wishes.”