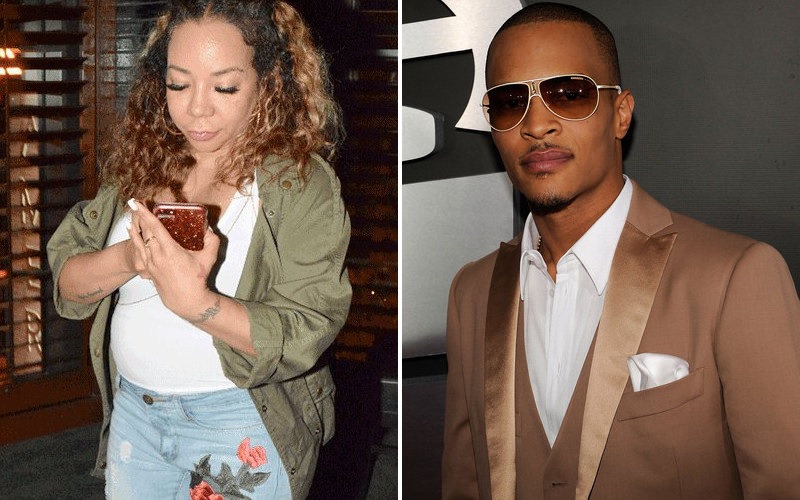 T.I. and Tiny may be ending their marriage, but is the ex-couple expanding their family? A recent candid photo has many wondering if Tiny is expecting her fourth child with her soon-to-be ex-husband and if the surprise pregnancy could reunite the hip hop couple.

MediaTakeOut “reported” on Monday (Jun. 5) that the pregnancy rumors are true. The site posted a photo of Tiny wearing a fitted white shirt last week which the site claims shows a “clear baby bump.” Despite the unlikelihood and no announcement from Tiny or T.I., several blogs picked up MTO’s report. While not totally impossible, a baby on board is improbable given that the couple hasn’t lived together in quite some time. Tiny is also in the midst of revitalizing her music career with Xscape.

It’s more likely that the photo in question was just snapped at an odd angle. Tiny posted a photo in the same outfit on Instagram and the “clear baby bump” magically disappears.

Even if Tiny was pregnant, the baby probably wouldn’t save their marriage. Tiny filed for divorce in December. In the Family Hustle series finale, both accused the other of cheating, but also agreed its time they go their separate ways. T.I. is also rumored to be in relationship with Bernice Burgos.

As always, take MTO’s reporting with a grain of salt. However, I would suggest to save you baby congratulations for the birth of Beyoncé and Jay Z’s twins.