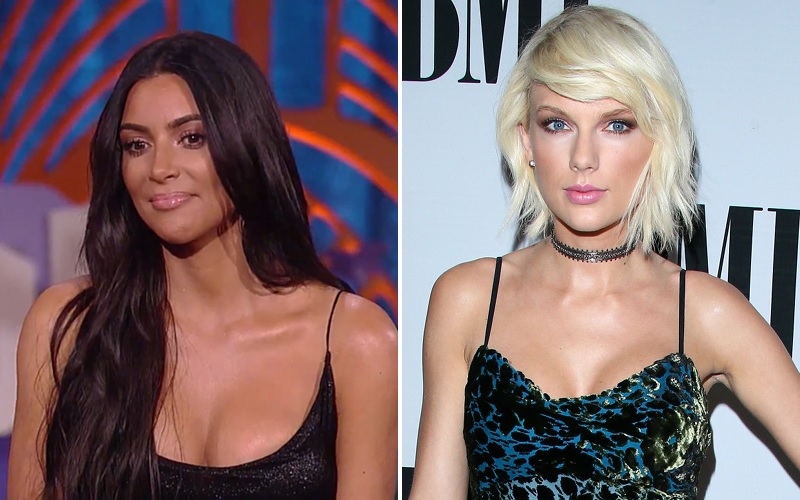 Kim Kardashian just gave an update on the status of her relationship with Taylor Swift since she hosted the #KimExposedTaylorParty last year.

Kim appeared on the Sunday night (May 28) broadcast of Watch What Happens Live as the New York-based show finished its week in LA. Host, Andy Cohen asked Kim if she had spoken or had any contact with Taylor since she exposed the pop star as a liar in a series of videos on Snapchat.

The TV personality didn’t verbally respond, but shook her head and shrugged her shoulders.

Kanye West’s longtime feud with Taylor became his wife’s feud last July when she released several videos of Taylor personally approving lyrics from Kanye’s song “Famous” during a private phone call. Kim posted the videos on Snapchat to expose Taylor after she publicly denounced the song.

Kanye reads Taylor the lyrics, “I feel like me and Taylor might still have sex.” Taylor can then be heard calling the lyric a “compliment.”

“It’s obviously very tongue in cheek either way. And I really appreciate you telling me about it. That’s really nice.”

Once Kim released the Snapchat videos, sparking the No. 1 trending hashtag #KimExposedTaylorParty, Taylor also released a social media statement. She explained she was unaware Kanye referred to her as a “b*tch” in the song and described Kim’s take-down as “character assassination.”

Taylor also wrote that she wanted to be “excluded from this narrative” Kim and Kanye have perpetuated for several years. And she did, leaving the public eye and social media for a long while. She was recently photographed for the first time in four months looking disheveled. Kim’s update on her relationship with Taylor was a follow-up to an WWHL audience question. A fan described Kim exposing Taylor as the “best night of my life” and asked how their feud affected Kim’s sister, Kendall Jenner, being in Taylor Swift’s “squad” of friends.

Clearly, there is nothing but “Bad Blood” between these Hollywood celebs. However, Taylor knows that she took major Ls in 2016. It will be interesting to see how she manipulates her comeback as she is reportedly preparing to release new music in 2017.