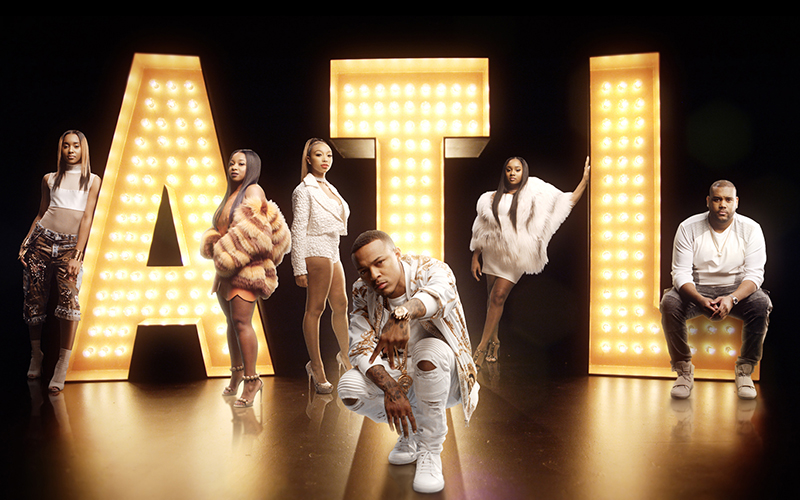 Hotlanta is about to get hotter now that the younger generation of Atlanta’s hottest music moguls are telling their stories via the new WeTV series “Growing Up Hip Hop Atlanta.”

GUHHATL chronicles the lives of six young musicians whose families found fame and fortune in the Hip Hop industry striving to succeed independently in their own careers. Atlanta is considered the “new Mecca for Hip Hop,” and the series will explore what life is like for a tight-knit crew of friends who all know each other through their famous parents.

The rich history of the Atlanta hip hop scene has fostered a unique sense of pride and closeness among the artists that resembles a family. But like any family, Atlanta’s next generation of hip hop stars do not always get along. Growing up together in the shadow of their legendary parents has established tight bonds and bitter rivalries, as everybody fights for their chance to push their way into the spotlight.

The premiere episode of the reality show — a spin-off of the WeTV series “Growing Up Hip Hop,” which is based out of New York and Los Angeles — debuts Thursday night (May 25) at 10 pm EST.

Get to know the cast of “Growing Up Hip Hop Atlanta” below: Shad Moss, better known as Bow Wow (formerly Lil Bow Wow), has been rapping since he was 6 years old.

After being discovered by Snoop Dogg in 1993 while performing at a concert in Los Angeles, he was introduced to Jermaine Dupri a few years later, and the rest is history. In 2000, at the age of 13, he released his debut album Beware of Dog.

In addition to rapping, Bow Wow, now 30 years old, also made a name for himself as an actor, starring in major blockbuster films such as Like Mike, Johnson Family Vacation, Roll Bounce, Lottery Ticket, Madea’s Big Happy Family (as Byraaaaaaaaan!!!) and more.

Though he was born in Columbus, Ohio, Bow Wow has always considered Atlanta his hometown. And he’s returning to the city to release his first album in nearly 10 years, which he intends to make his “swan song” before bowing out of the industry so that he can direct his focus to raising his child and dealing with other personal issues.

“I’ve been doing this [music] for over 20 years, and that’s 20 years of me doing that one thing,” Bow Wow told Hollywood Life. “Throughout the journey of my career, I fell in love with a lot of things [but] music just happened to open up the floodgates for the movies, the hosting and everything else. I feel like I’ve done everything I could as a rapper, so then you start looking for a new challenge; and, acting did that for me. I can’t do the same thing forever. It’s about growth. You can’t be one dimensional.”

Bow Wow is also the executive producer of “Growing Up Hip Hop Atlanta.”