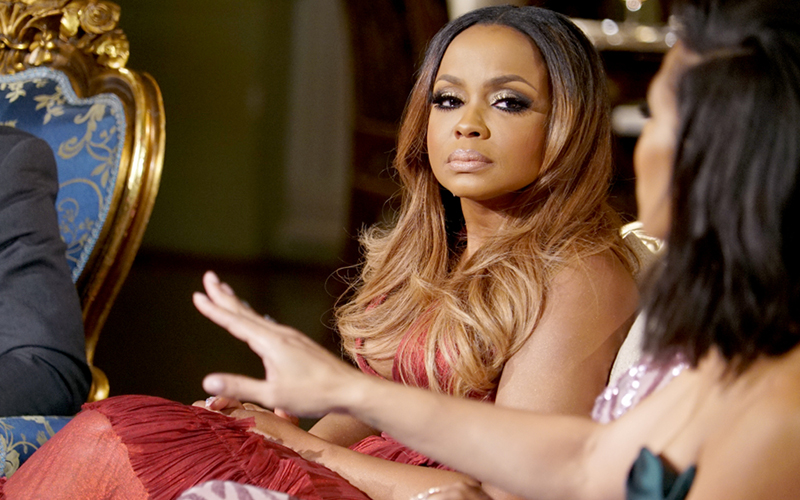 “The lies, the lies!” as Kandi Burruss exclaimed during the explosive Season 9 Real Housewives of Atlanta reunion, have finally caught up with Phaedra Parks. Several credible sources say Phaedra has been fired from the hit Bravo series and will NOT return for Season 10.

RHOA sources have confirmed to media outlets such as TMZ and E! News that Bravo gave Phaedra the pink slip back in April, after it was revealed she was the source of the rumor which alleged Kandi and her husband, Todd Tucker, attempted to drug and date rape fellow RHOA castmate, Porsha Williams.

Much like the rest of us, Bravo felt the allegations crossed a line and opted not to renew the 43-year-old attorney’s contract for the benchmark 10th season.

Sources also tell TMZ that footage of Phaedra relaying the date rape lies to Porsha did not air because Kandi allegedly threatened the network if it did.

Bravo has not confirmed Phaedra’s exit. When asked to comment on Friday (May 5), Housewives creator Andy Cohen played coy and stated no season 10 casting decision had been made, but conversations would begin this week.

However, Cohen was clearly pissed at Phaedra’s season 9 behavior. “I’m shocked,” he told an upset Kandi during a backstage moment while filming the reunion. “[Phaedra] was unemotional, which surprised me,” he recently told E! News.

Phaedra doesn’t seem to be letting her firing or the public dragging she received after the reunion aired get her down. “New day, new week! Have a magnificent #Monday! #letsgo,” she wrote on Instagram on Monday (May 8), accompanied by a motivational meme.

Leaks regarding the reunion sparked rumors that Phaedra would be fired due to the shocking secrets that would be exposed. Though Phaedra could have used season 10 for atonement, accusing Kandi (and Todd) of being rapists is too dangerous and malicious for her to continuing appearing on the show.