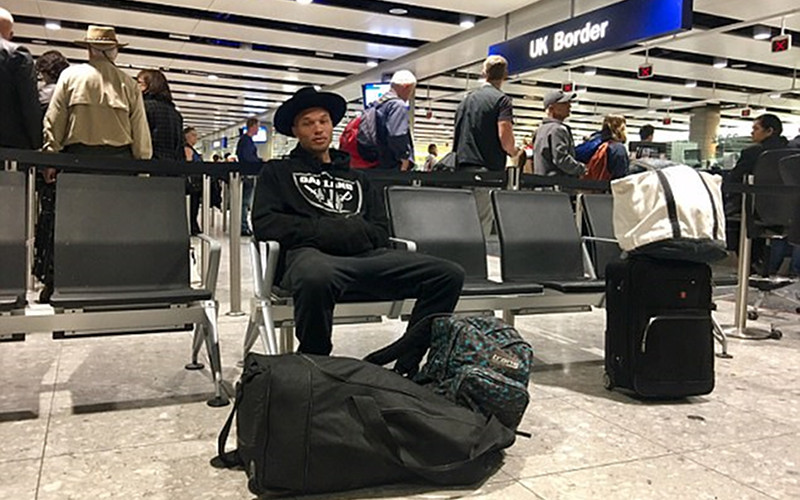 The “hottest convict ever” has had another run-in with the law. Jeremy Meeks was detained for eight hours in London and deported back to the United States before ever leaving Heathrow Airport.

The convict-turned-model arrived in London on Monday (Apr. 24) for a week-long stint of modeling gigs. However, Meeks’ criminal record apparently raised a red flag for UK border officials. He was prohibited from entering the county and police escorted him on an American Airlines flight to New York.

“I’m sick of this sh*t. I’ve been denied,” Meeks said in a video while being escorted to his deportation flight. “London don’t want me here. I done served my time. Sh*is crazy. Don’t make no sense.”

Meeks was not arrested but was detained for over eight hours. He was interviewed, fingerprinted, and searched. He never even made it through customs. Instead, he was forced to wait in a Border Force holding area for hours before being questioned for four hours and, ultimately, deported.

The model was also traveling with his wife and manager, Jim Jordan. Both were allowed through customs. Jordan says Meeks had all of the proper documentation needed to travel, including a work visa and a letter from his parole officer.

Jordan plans to sort out the issue at the US Embassy in London and to also ensure Meeks can remain in the country for the week.

Meeks was in London to attend the launch party for his first British magazine cover this Thursday. He also had several other gigs lined up.

“[This was] the very first thing that Jeremy has done. It was his first time in London and he was all excited. It was his big debut. He was on the right track for what we feel was going to be his new life. Now he’s very sad. Hopefully this is just a setback and he will be able to come back from this.”

After arriving in LA on Tuesday (Apr. 25), Meeks told TMZ UK border patrols were “just doing their job” and said he would go back to London despite the experience.

Meeks became a viral sensation in 2014 after his mugshot was posted. He was dubbed the “got convict” and began a modeling career when he was released in March 2016.

He made his runway debut in February by walking in the Philipp Plein show during New York Fashion Week.