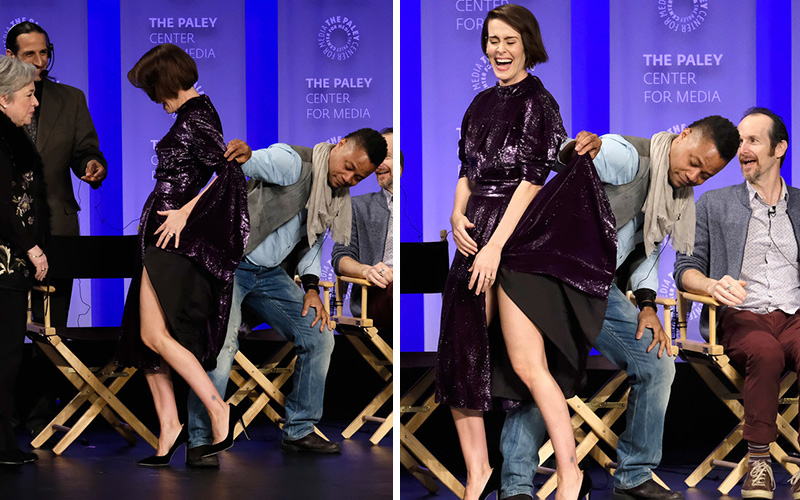 At Los Angeles PaleyFest on Sunday (Mar. 26), the cast of American Horror Story took to the stage to discuss last year’s “Roanoke” season, but people aren’t talking about the discussion so much as what Cuba Gooding Jr. did while onstage.

As Sarah Paulson introduced Kathy Bates to the stage, Gooding decided that it was the perfect time to take a peek underneath Paulson’s dress. A video shows him lifting the dress up as Paulson and Bates smile at the crowd, causing Paulson to quickly recoil and force the dress back down.

Okay, yes I went back to screenshot this. But does he seriously think this is okay? @cubagoodingjr @MsSarahPaulson pic.twitter.com/xHEnURhY3H

Paulson laughed it off and everything went about as normal after the strange moment, but, as the internet is prone to do, the incident didn’t end there. As word spread of what happened, reactions began to flow in on social media and, spoiler alert, people aren’t too happy with ole Cuba.

I think Cuba Gooding Jr hair cut is punishment enough for his behavior.Why is he dressed like a hipster gladiator? #CubaGoodingJr

Take a lesson from cele and keep your hands off her skirt and protect her from creepy fans like a real friend would @cubagoodingjr https://t.co/rEYovMc2RL

Cuba Gooding Jr. has just embarrassed himself at #AHS Paleyfest. This is junior high behavior. Leave the women alone https://t.co/wdMdJR161O

@cubagoodingjr hi, dude. did you apologize to Sarah? you should if you didn't bc what you did was Gross and Disrespectful

@cubagoodingjr Maybe a joke between friends but, it's disrespectful. pic.twitter.com/gSEiIMaZwz

Now whether or not Cuba Gooding, Jr. is even aware of the Twitter-storm his actions have caused is unclear. Following only 12 people and sending out a grand total of 22 Tweets, he’s clearly not the most active individual on social media.

Paulson and Gooding have worked together a lot recently, playing husband and wife on Season 6 of American Horror Story as well as co-starring in The People vs. OJ Simpson. Neither have commented on the incident nor the backlash it has received.