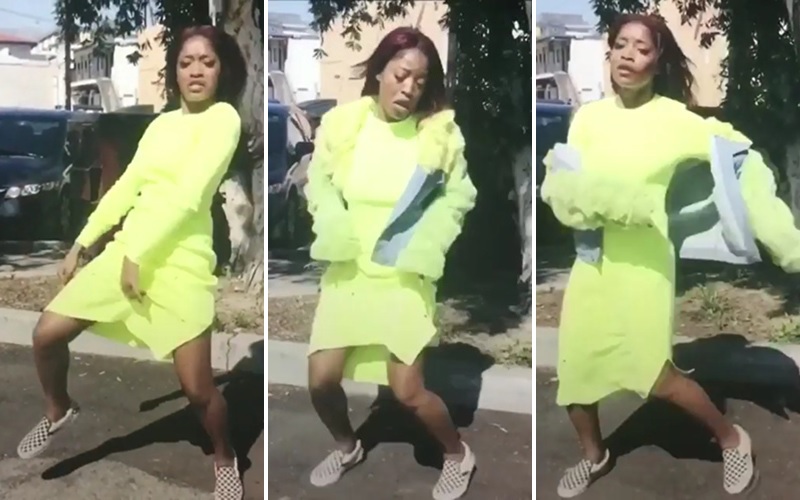 Is it just me or is Keke Palmer starting to turn into one of those Instagram-fame personalities? The talented actress/singer seems to get more attention for her social media antics than for her work. Lately, it’s her random dance clips that’s got people talking.

Palmer became a trending Twitter topic Tuesday (Mar. 14) after she posted a video of herself dancing to Future’s “Mask Off.” In broad daylight, the Scream Queens star felt it in her spirit to dance in the middle of the street and create a club meme.

“When u bored af at the club but yo old n*gga walk through the door and u gotta give a show.”

Following the vid, Twitter asked a collective “What is Keke doing?” Many were confused by Palmer’s moves and random dance breaks. Others expressed sarcastic concern for the actress, even stating she looked like she’s high.

This is Exactly how KeKe Palmer be dancing pic.twitter.com/c2VcyVL2kP

Somebody check Keke palmer and Chris Brown into rehab ….please.

Keke Palmer made one successful video hittin a beat and now she posts a video everyday. Jesus ?????

I'm concerned about Keke Palmer. Why does she look like a crackhead when she dances?

This isn’t anything new for Palmer. She has posted several dance videos in recent weeks. Some on Twitter defended Palmer’s Future dance solo and applauded her for carefree attitude.

So folks mad at keke Palmer cause she dancing and feeling carefree? pic.twitter.com/OnTocrk7PE

lol everyone's calling Keke palmer a crackhead… for what lol she's just dancing…. nothing about her behavior implies she's a crackhead

will never understand the keke palmer hate. y'all just mad y'all aren't as lit as her lol

I thought twitter loved carefree black women but yet y'all making fun of Keke Palmer for dancing pic.twitter.com/0vqp6fUwXR

I guarantee Keke Palmer could care less about people talkin about her dancing because
1. She got more money that you
2. # 1.

Black people confuse me most of the time. Y'all say y'all support black people, but when Keke Palmer dance you guys disrespect her. Like wtf

Here are other clips of Keke literally dancing to the beat of her own drum.