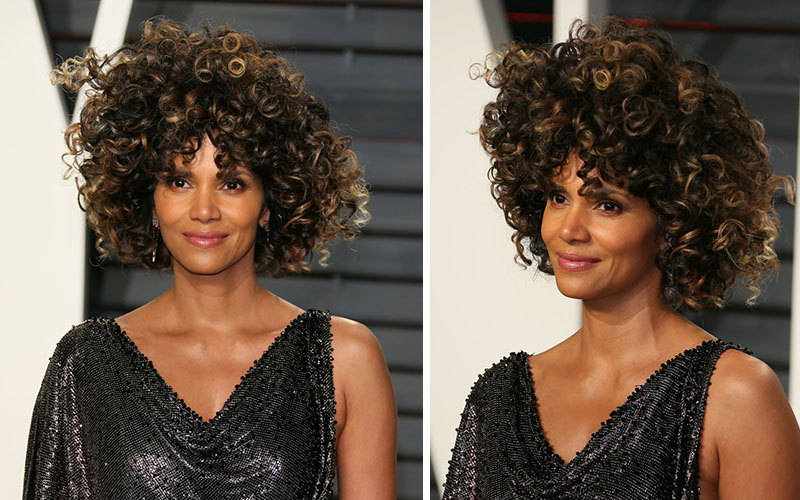 Look, for many people in their 30s, Halle Berry will always be one of those standards of beauty. Her status as a beauty icon is cemented. And not even a bad hair day can take that away from her.

Halle had a very bad hair day at the 2017 Oscars. She showed up with a very noisy, messy and busy cornucopia of curls sitting wildly on top of her head. While the choice was a bit of a curveball, even more eyebrow-raising were the claims she made after the Oscars that her hair was “natural” and that she was merely honoring her natural beauty with the big, curly look.

In Halle’s own words to Vogue, she said:

“I have always marched to the beat to my own drum, and I think this red-carpet look encapsulates that. The dress is glamorous with a sense of romance that made me feel feminine and fresh. With this look, I celebrate my natural hair by allowing it to be wild and free.”

Hold up. Waaaaaaaiiiiiitt. Now I know that Halle Berry is a mixed race woman, but caucasian blood or not, there is no way that bird’s nest is “natural.” The shape and volume of those curls look about as natural as the nose on Lil’ Kim’s face.

And I wasn’t the only who called B.S. on Halle’s natural curls claim.

That is a synthetic wig HALLE lmao https://t.co/0AREY3mw3R

Halle talmbout that was HER HAIR and not a wig? pic.twitter.com/xoTvESaFtz

Other folks just had a ball taking Halle’s wig game down a few pegs. Some of my fave internet clapbacks were these:

They play too much!!!! ????Talkin about Halle Berry was wearing Whitney Houston's last week of life wig. I just can't!!! Please stop!? pic.twitter.com/VTkH5FbDxu

And then there was this YouTube song dedicated to letting Halle know that the wig’s not fine:

Halle, if you wore a bad wig then own it. But you ain’t gots to lie on your wig, baby.