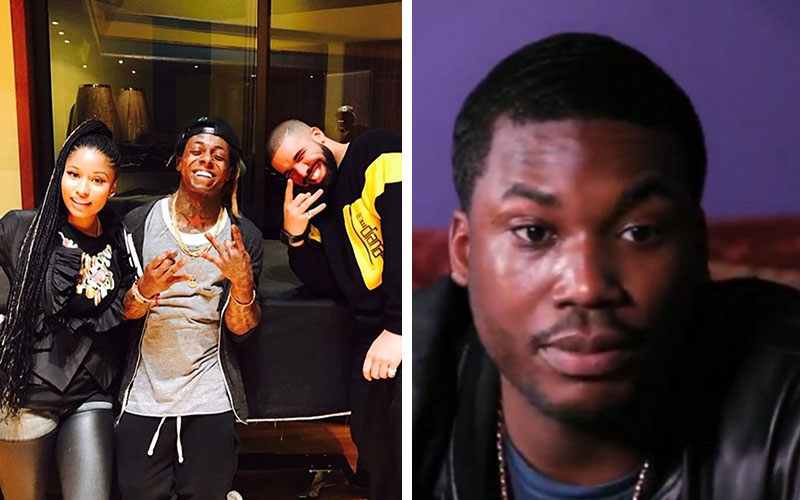 If we’re being honest, 2017 hasn’t been off to such a great start, what with Trump runnin’ around in these streets setting fire to our Constitution, liberties, judicial system, civil rights, dignity and such. But one good thing that has emerged in this new year is that Nicki Minaj finally got rid of the dead weight that she called her boyfriend for the past two years: Meek Mill.

If you’ll recall, Ms. Minaj made the announcement that Omeeka was officially over via Twitter, and the world literally rejoiced:

To confirm, yes I am single. Focusing on my work & looking forward to sharing it with you guys really soon. Have a blessed New Year. Love u?

Unsurprisingly, Meeky Mouse wasn’t so pleased with being ditched in the dirt, so Mr. Twitterfingers did what he does best: Post subliminals aimed at his ex on social media.

But don’t you know less than 3 weeks since she sent Meek Mill to the dog house, we caught wind of Nicki reuniting with her Young Money family Lil’ Wayne and Drake.

You know, Drake, the guy she hasn’t been speaking to for a while because he utterly ruined her then-boyfriend Meek Mill’s career with two legendary diss tracks?

Yeah, that guy is back in her life IMMEDIATELY now that Meek Mill has been shown the door.

In news that might be coincidental, Meek Mill has also deleted his Instagram account. He probably just knew his Instagram feed was gonna be flooded with flicks of Nicki and Drake cheesin’ together sooner than later and decided to just get ahead of the embarrassment and ex himself out.

Good for him. Smartest thing he’s done in his career in a minute.

On the Young Money side of things, word on the street is that part of the reason for “The Big 3” reunion is that a Young Money Reunion Tour is in the works. I have no idea how they’re gonna make that work since Baby is holdin’ Wayne’s money but godspeed and good luck with that.

Meanwhile: Nicki Minaj, welcome back to the winnin’ team. Please don’t let stray dogs set you on the path to loserdom and diminished stature again. The Pinkprint could and should’ve done better if it wasn’t weighed down the Meek Mill baggage. We look forward to another body of work that can give us that “Roman’s Revenge,” “Monster,” or “Moment for Life” vibe again.