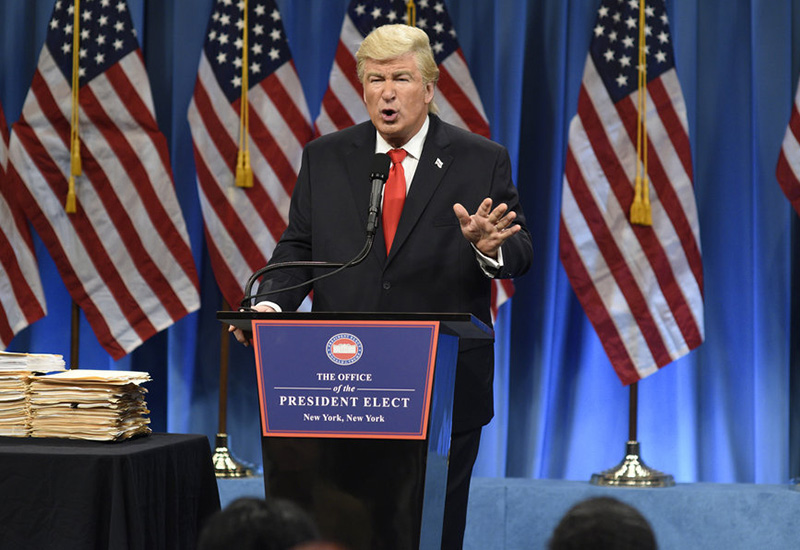 President-elect Donald Trump continues to attack any network or media outlet that criticizes him, but NBC’s SNL is not scared of his tweets and is not holding back.

During its Jan. 14 broadcast, the sketch comedy show’s cold open mocked Trump’s sh*t-show of a press conference he held on Wednesday (Jan. 11).

Alec Baldwin returned to SNL to “rebroadcast” Trump’s first press conference in 167 days and his first since becoming president-elect. Baldwin began the cold opening by stating:

The running gag of the 7-minute skit involved reporters asking Trump questions regarding a dossier that was released last week that suggested Trump once paid for prostitutes to perform “golden showers” during a trip to Moscow, Russia.

The unverified claims raise even more concerns Russia may have compromising information over Trump. The president-elect has denied the claims and the intel has not been authenticated.

However, no pun intended, any reports of golden showers and Trump is comedy gold. SNL writers did intend these puns. SNL Trump says:

“Guys, I do not want to talk about the pee-pee. I want to talk about what is really important, which is jobs. I am going to bring back a thick stream of jobs in this country. The biggest, strongest, steadiest stream you’ve ever seen. This country will be literally showered with jobs because I am a major wiz at jobs. This will be a golden opportunity for me as president to make a big splash.”

SNL’s parodied press conference also touched on the lack of A-list stars slated to perform at Trump’s inauguration, Trump’s sketchy plan to divest from his businesses, and his awkward/troubling encounter with “fake news” CNN reporter Jim Acosta. Vladimir Putin even makes an appearance.

.@NBCNews is bad but Saturday Night Live is the worst of NBC. Not funny, cast is terrible, always a complete hit job. Really bad television!

(I’m pretty sure he has more important things to do, but that would mean actually doing work and putting his country first.)

Keep in mind, Trump hosted SNL in November 2015. He recently said on Today (an NBC show) that his SNL episode was a “good show,” but now feels “there’s nothing funny about [SNL]. The skits are horrible.”

Celebrity Apprentice, a show Trump will continue to executive produce while POTUS, is also an NBC show.

Media (news and entertainment) will be extremely important over the next four years — if Trump even lasts that long. As hard and loud as Trump rails against media, it needs to respond even stronger. Despite the tweets, I hope SNL will continue to call this fool out while also making us laugh in the process!

(And, yes I just called PEOTUS a “fool” because I’m not scared.)