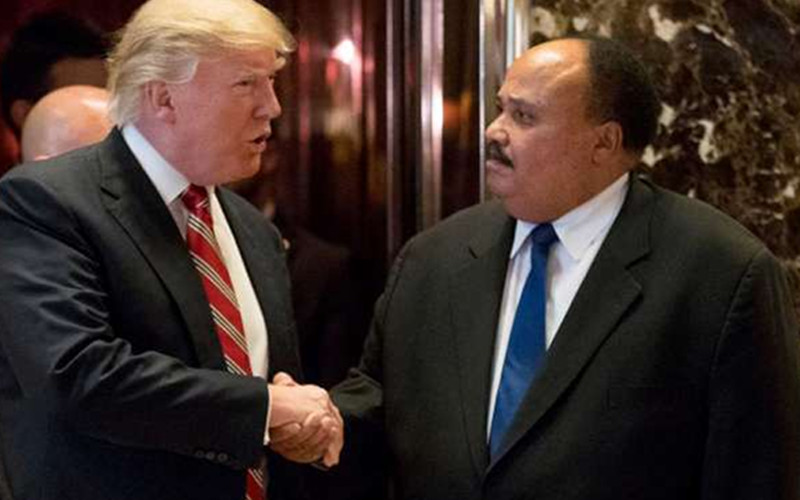 Martin Luther King III met with the PEOTUS at Trump Tower Monday (Jan. 16), on the holiday that honors his father, to discuss voting rights and the poverty crisis in the nation. King feels Trump will work on behalf of all Americans and added their meeting was “extraordinarily constructive.”

“It is very clear that the [voting] system is not working at its maximum…[Trump said] that he is going to represent all Americans… I believe that’s his intent. I believe we have to consistently engage with pressure, public pressure. It doesn’t happen automatically, my father and his team understood that, did that.”

Trump did not talk to press following his private meeting with King. *shocker* He instead retreated back into the lobby elevator and disappeared somewhere in Trump tower.

Despite not addressing his conversation with King’s son and cancelling a previous planned MLK Day trip to the Smithsonian Museum of African American History and Culture, he did take to Twitter to celebrate the civil rights leader.

Celebrate Martin Luther King Day and all of the many wonderful things that he stood for. Honor him for being the great man that he was!

King also shared his thoughts on Trump’s recent attack on Rep. John Lewis. PEOTUS went on a Twitter rant against Lewis Saturday (Jan. 14), claiming the civil rights leader, who marched alongside MLK and was nearly killed by state troopers in Selma 1965, was “all talk and no action.”

Congressman John Lewis should spend more time on fixing and helping his district, which is in horrible shape and falling apart (not to……

mention crime infested) rather than falsely complaining about the election results. All talk, talk, talk – no action or results. Sad!

The attack was sparked after Lewis told NBC’s Meet the Press that he didn’t believe Trump was a “legitimate president” and was skipping the inauguration.

King defended Lewis, but also seemingly gave Trump a slight pass because “in the heat of emotion… things get said on both sides.”

“I think that in the heat of emotion a lot of things get said on both sides. I think that at some point I am, as John Lewis and many others are, a bridge builder. The goal is to bring America together and Americans… I would say John Lewis has demonstrated with his actions… And at some point in this nation we’ve got to move forward.”

Politicians, leaders, and people on all sides of the political spectrum have said Trump was wrong for his comments and expressed their support for congressman Lewis.

Lewis and more than Democratic lawmakers have stated they will not be attending Trump’s inauguration on Friday.