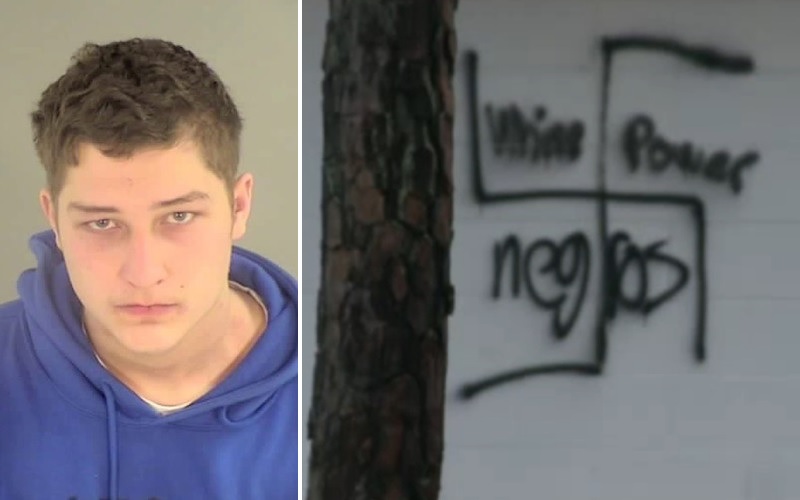 A Virginia mom is defending her racist son… because he has a black girlfriend. According to Raw Story:

Vandals smashed a urinal and painted the misspelled message, “oopps,” above the broken pieces, and they spray-painted “white power” and graphic insults against the Black Lives Matter movement, immigrants and President-elect Donald Trump. Ferrell was arrested and charged with three counts of intentionally damaging a property or monument. He admitted to the crime, but denies writing any of the racist content.

“I can’t understand for the life of me why he would’ve gone there or done that… He did admit to breaking the sink and drawing pictures of genitalia. But, he did not write the racist words or none of that. His girlfriend is actually Black so he’s far from being racist.”

Is this a variation of the “I have black friends” defense? I hope Maxey realizes that even people in interracial relationships can still hold racist beliefs or commit racist-based crimes.

@RawStory
Having a partner does not excuse you from racism, and you thinking it does only affirms the fact that you are indeed racist.

@RawStory Right. And Even though Thomas Jefferson owned slaves, he liked blacks. He raped a 13yr old black girl and had kids with her.

@RawStory Don’t mean he’s not racist,White slavers constantly raped and was involved with their black slave but they still was racist.

@RawStory Same as saying, “I can say the n-word because I have black friends.”

@RawStory Counting down the seconds until we find out that his black girlfriend is Stacey Dash.

Ferrell says two other people were with him the night he vandalized the park and they are the ones who are responsible for the racist language and symbols. He says one of the guys bought the paint at Walmart and also bought the underage Ferrell alcohol.

Police are investigating the other suspects, while Ferrell in being held in jail without bond. The damage to little league park was estimated around $5,500-$6,000.