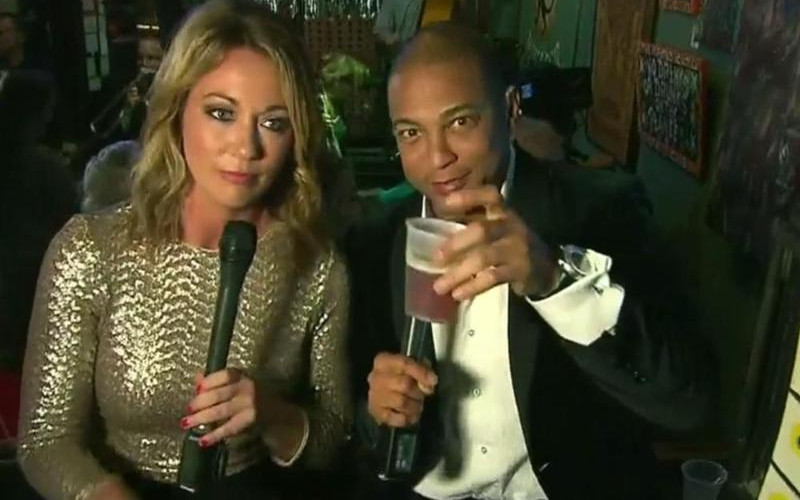 These are the exact words from CNN anchor Don Lemon as he hosted the cable news channel’s New Year’s Eve coverage. Lemon spent about three hours on live television throwing back shots and getting drunk.

While Anderson Cooper and Kathy Griffin hosted the program from Times Square, Lemon and fellow CNN anchor Brooke Baldwin were stationed at a bar in New Orleans. Lemon got his own party started before 8 pm central time.

It seems @donlemon, @BrookeBCNN got the #CNNNYE party (and the drinking) started a little early down in New Orleans https://t.co/vSI1sy9oXk

From that point on, basically every time Cooper and Griffin checked in with the New Orleans correspondents, Lemon was taking a shot, serving a shot, or getting a little too turnt to be at work.

Don Lemon is SMASHED on live TV and his co-anchor looks like she's had enough. These tears I cry ??? pic.twitter.com/D8mwQxTcnx

He even got his ear pierced on live TV. He contemplated a nipple ring upon Griffin’s suggestion, but Baldwin shut that down.

You know you’re wasted when you have to get talked out of piercing your nipple on live TV and settle for an ear. #CNNNYEpic.twitter.com/4s3Zy9rciE

Yes. @donlemon just got his ear pierced live on the air https://t.co/yWGl6FUClk

However, my favorite Don “Lit-mon” moment of the night was when self-admitted self-centered Lemon opened up about possibly wanting a relationship in 2017. “Are we going there, right now?” a perplexed and probably fed up Baldwin asked.

Lemon’s night came to end as New Orleans rang in the new year and, in a moment of drunk honesty, the anchor said, “2016 was awful.” Then boom, his mic went dead!

Many assumed CNN cut Lemon’s mic on purpose. However, apparently, Mariah Carey wasn’t the only person having audio issues. The CNN hosts had technical difficulties the entire night and producers felt this was a good time to cut off all audio and just have celebratory sounds from the bar and New Orleans.

Though social media enjoyed “drunk” Lemon on air, CNN sources say the anchor was, in fact, not drunk while working. They say Lemon only drank the few shots shown on air and did not consume any alcohol during breaks.

However, former CNN anchor Soledad O’Brien says CNN could have kept that explanation. She was not here for Lemon’s antics.

A drunk anchorman got his ear pierced live on tv last night. It's a very low bar for credibility. https://t.co/EheJVwv4Ee