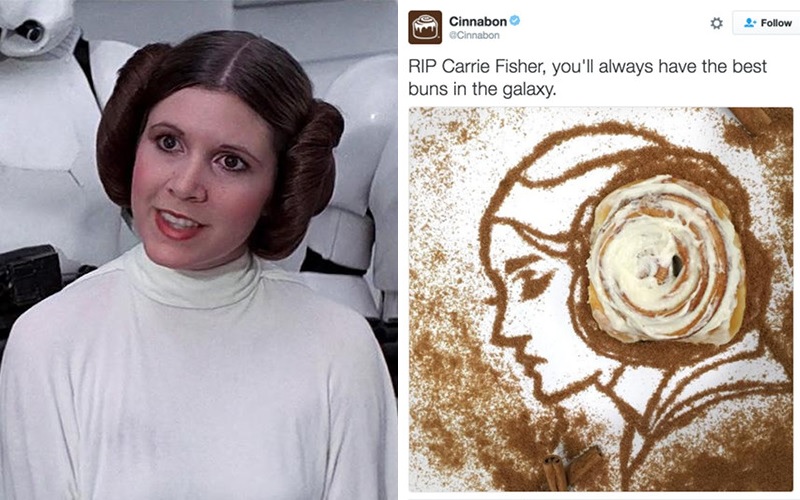 Tributes in honor of Carrie Fisher have poured in since her Tuesday (Dec. 27) passing. Many have honored the Star Wars actress by incorporating her iconic Princess Leia hairstyle. However, Cinnabon is currently under fire for its somewhat ill-conceived tweet.

The unique Princess Leia hairstyle has often been compared to cinnamon buns. So, it’s fitting for Cinnabon to offer its condolences to the actress’ family. Using a Princess Leia image created out of cinnamon and an actual Cinnabon, the company tweeted “RIP Carrie Fisher, you’ll always have the best buns in the galaxy.”

Though I personally don’t find the tweet too problematic, understandably, many found the tweet insensitive and felt Cinnabon was using Fisher’s death as a promotional tool.

Tacky. Get over yourself and stop capitalizing on the tragic loss of an icon.. #Objectification

Wow, what poor taste you have RT @Cinnabon: RIP Carrie Fisher, you'll always have the best buns in the galaxy. https://t.co/DYvEcW6gAb

And the award for "Most Tasteless Brand Reaction To A Celebrity Death" goes to @Cinnabon. #fox5dc pic.twitter.com/XCraFJTZX2

Hey social media friends, I've got an early tip on a job opening at Cinnabon. pic.twitter.com/C8cAmJhkst

Cinnabon has since deleted the tweet and offered an apology.

Our deleted tweet was genuinely meant as a tribute, but we shouldn't have posted it. We are truly sorry.

Some Twitter users and Fisher fans liked Cinnabon’s tribute and defended the company after it deleted the tweet.

Hey @Cinnabon
You depicted what we all had thought for 40 years. I salute your tribute to the actress with a warped sense of humor

@Cinnabon I didn’t know her personally, but based on her sense of humor, I think that she would have loved your tribute!

@Cinnabon Nothing wrong w/ your tribute of Carrie Fisher. Sorry the world is so offended by EVERYTHING

The image that caused the controversy was actually used earlier this year on May 4th, a day that has become known as Star Wars Day. Then, the company stated Leia had the “second best” buns in the galaxy.

Here’s to the princess with the second-best rolls in the galaxy. #MayThe4thBeWithYou pic.twitter.com/N03d6ZnQs5