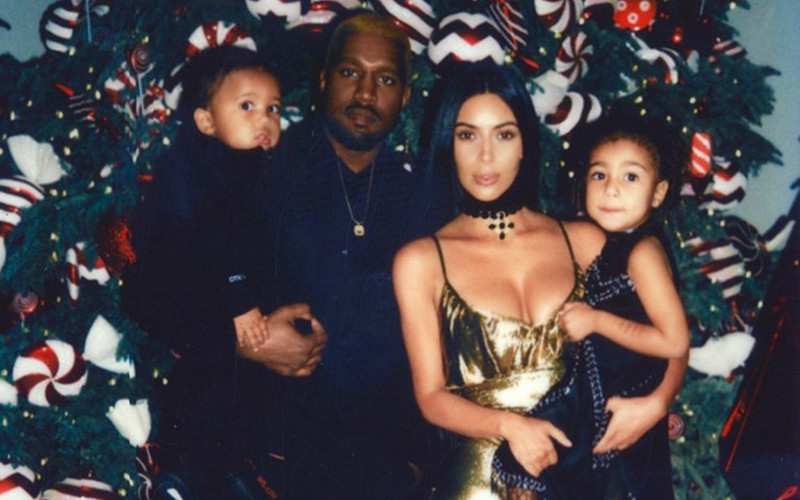 Amid divorce rumors, Kanye West and Kim Kardashian are putting on a brave face, or at least attempting to. Kanye took to Twitter to post a family pic from the annual Kardashian/Jenner Christmas party.

I wish I could say they look like a happy family, but I can’t even detect a hint of smile.

Reports suggested Kim had “banned” Kanye from Kris Jenner’s “Kristmas” party following his recent mental breakdown and 9-day hospitalization. However, a spokesperson for Kim quickly shut down the rumor, stating “Kanye was at the party.”

Kanye himself, confirmed he attended the Christmas Eve party on Tuesday (Dec. 27) by posting a picture with his wife and their two kids, North and Saint.

Recent events like Kim’s robbery and Kanye’s breakdown have reportedly taken a toll on the couple’s marriage, with Kim even considering divorce once the father of her children recovers from his mental struggles.

However, a source tells People magazine “splitting is not even a point of discussion.”

“Truly no truth behind divorce rumors. It’s not something she would divorce him over. He had a breakdown, but it does not pertain to them not getting along.”

Kanye has been seeing a therapist since checking out of UCLA medical center and Kim is also getting help, but source adds the two are not currently in couple’s therapy.

“They are still both receiving individual therapy. Kim is dealing with the trauma from the robbery. Kanye is receiving help for depression and learning how to cope with stress better. They might be thinking about couple’s therapy, but so far it seems they haven’t had any sessions together.”

Paparazzi’s favorite couple has rarely been seen in recent months, adding fuel to splitsville speculation. However, amid the rumors, KimYe was spotted on Santa Monica date last week, and attended The Nutcracker with North on Christmas Eve prior to going to Kris’ holiday party.

Other members of the Kardashian/Jenner clan also shared photos of the festive shindig.