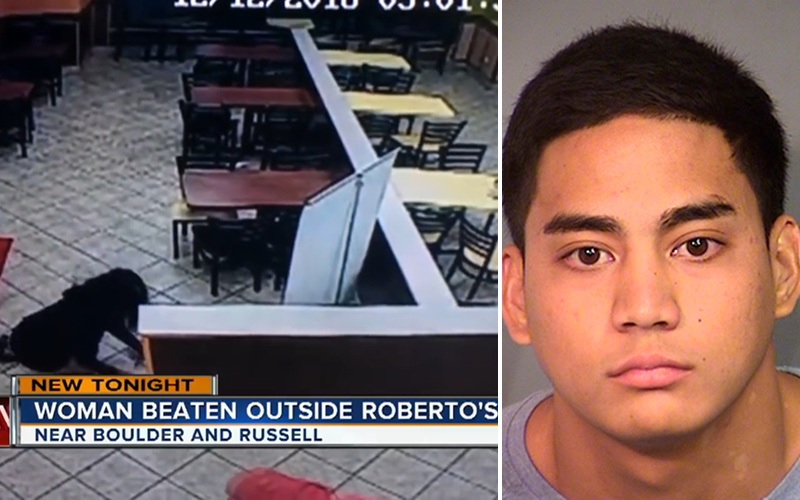 Is this Trump’s America?

Needing 15 stitches, a Las Vegas woman was brutally attacked twice after confronting a man for yelling multiple racial slurs at her. The man has been charged with a hate crime, but released on bail.

Early morning December 12, Carmen Porter was in the drive-thru of a Las Vegas Roberto’s Taco Shop when a man yelled racial a slur at her through her window. After a few seconds of contemplation, she decided to confront the man, identified as Ronnie Rosario.

She eventually parked her car and went to the front door.

“I asked him, what did you just say to me and began shouting and saying ‘It is called freedom of speech. You heard me.’”

This is when Rosario, an apparent body builder, became violent. He picked up a nearby “Wet Floor” sign and began hitting Porter. As Porter lay on the ground, he briefly stopped, only to attack her again with the sign. Rosario hit the woman repeatedly, while continuing to yell racial slurs.

A passerby intervened and pulled Porter away from the racist. The attack was captured on security cameras.

“I remember falling towards the rocks, and even when I was on my knees in the rocks he kept hitting me. Just the derogatory terms he was throwing at me with each whack. Makes me extremely angry.”

Between the first and second attack, Rosario can even be seen going back into the fast food joint to get his food.

Bloodied and attempting to call 911, Porter didn’t notice this detail until viewing the security footage.

“To see him walking back to the counter to finish ordering his food, like it was Ok, I don’t know what to do but be hurt and angry.”

Rosario was arrested, booked and charged December 14 with battery with a deadly weapon and a hate/bias crime. He was released on bail December 15 and is not scheduled back in court until February 28.

Unfortunately, I fear attacks like Porter’s will be a weekly story in the coming months. In my opinion, the election of Donald Trump was a win for hate and the little progress our society has done for civil rights/equality/inclusiveness can quickly be undone.

In fact, the Southern Poverty Law Center reported a “dramatic uptick” in cases of harassment and intimidation in the days following the November 8 election. 867 such incidents were reported within 10 days of Trump’s win, alone.

As the Electoral College voted Monday (Dec. 19), Trump is officially the 45th President of the United States. If you identify anything other than white, straight male, be on alert at all times because who knows what will happen in the next 4 years.