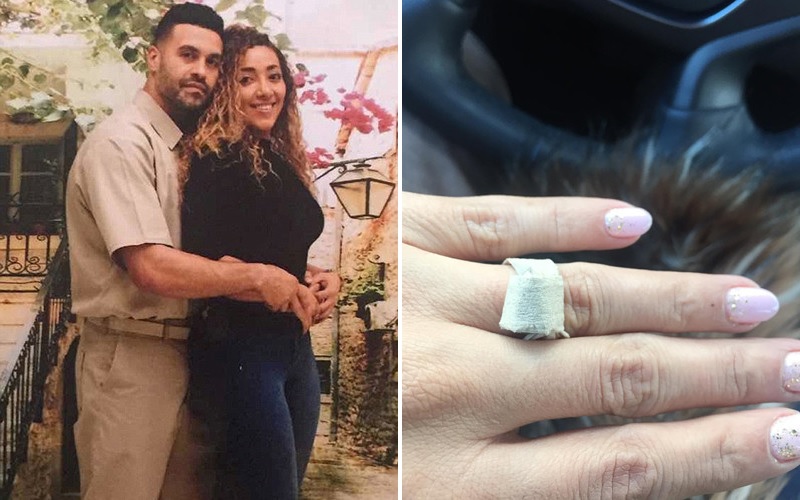 If the Instagram posts weren’t enough to convince you, we now have photographic proof that Apollo Nida is engaged to be married… while still in prison.

Photos of Nida and Sherien Almufti have surfaced. Apparently, the couple took engagement photos during one of Almufti’s visits to the Federal Correctional Institute in Fort Dix, New Jersey. The two lovebirds are standing in front of a fake backdrop, while Apollo is wearing his best khaki prison uniform. Who even knew prisons provided such a romantic photo service? According to the time-stamp, the photos were taken on November 7th.

One thing that is missing in the photos is an engagement ring. But don’t you worry, Apollo made a way. Who needs diamonds, when you got paper towels? Almufti recently posted a picture of the makeshift ring Apollo made her from the finest prison materials: paper towels and possibly a hair-tie.

Phaedra Parks’ ex-husband and his new fiancé are expected to make an appearance on the current season of Real Housewives of Atlanta. Almufti will appear on camera (and has shot scenes with some of the other cast members), while Apollo will again be on the show via phone.

Alfmufti hinted at her an appearance on Instagram with a photo that showed her getting her makeup professionally done. “Shout out to @desiree_addiesia got me looking like a porcelain doll for a very shady event! Lol #atl #rhoa #arabianqueen,” she wrote.

Almufti also threw little shade Phaedra’s way on Instagram. She liked a comment on one of her photos which read, “Way better than Phaedra.”

Phaedra appeared on Sunday’s (Dec. 11) edition of Watch What Happens Live! and did her Southern Belle shtick when host Andy Cohen brought up the photos and the couple’s upcoming appearance on her show. She wished them well and confirmed that her divorce from Apollo is finalized.