GOSSIPONTHIS.COM Celebs Madonna Might Have Gotten a Fake Ass and the Internet Is Creeped... 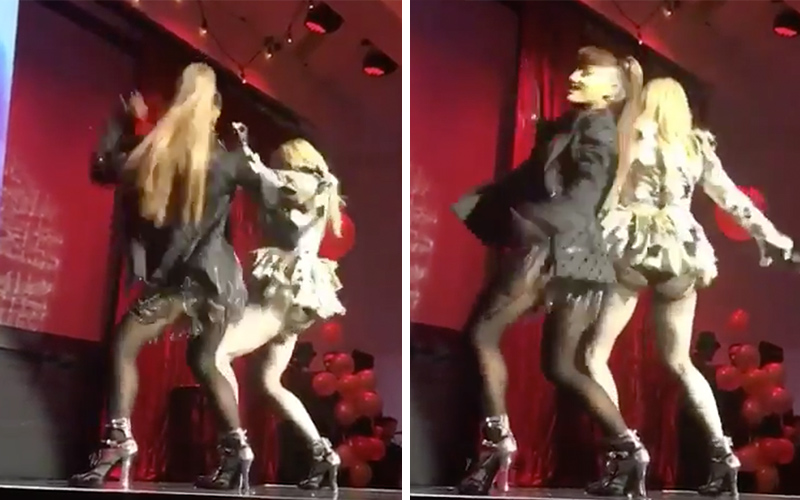 If there’s one thing Madonna, the bloodsucker who doubles as a pop star, is known for, it’s latching onto a trend.

Typically, this just means she picks the latest young star or starlet to hitch herself to for a collaboration. Last go round, this meant linking up with Nicki Minaj for her MDNA album in 2012 and again in 2015 for her Diplo-assisted jam, “Bitch, I’m Madonna.”

Somehow, someway, Madonna must’ve asked Nicki for the name and number for her ass surgeon, because Madonna turned up at her fundraising event during Art Basel in Miami, which benefitted her Raising Malawi charity, with an inflated bubble butt that had “Pink Friday” written all over it.

Madonna showed off fake cakes while she twerked next to the painfully thin and rhythmically challenged Ariana Grande:

So far, there’s been no official statement from Madonna or her reps, but let’s keep it real: Madonna’s no stranger to plastic surgery, so it’s not like this is her first go round under the knife. Still, it is ODD for a 58-year-old woman to get ass shots or butt implants or whatever the hell she did to plump her booty up like that.

The good people of the internet weren’t shy about making their thoughts and feelings about Madonna’s new ass known either:

So, I already knew Madonna has become Val as in Val from "Daria," but I didn't know she may have gotten her ass done. Bless her heart. https://t.co/svAeXNiCW6

Madonna went and got a fake ass where I been at

While I’m typically a live and let live kind of person, I really think the fake-ass trend is one that Madonna would’ve been better off leaving to the youngins.