GOSSIPONTHIS.COM Celebs 50 Cent Reveals Why He Believes Vivica Fox Insinuated He Was Gay,... 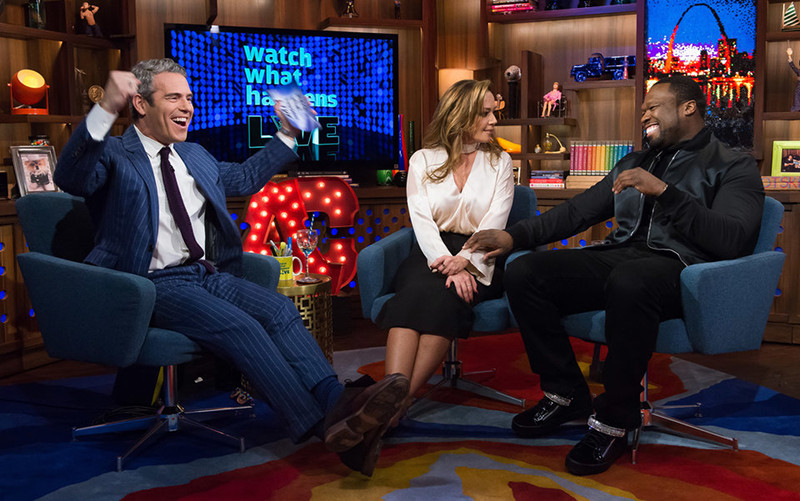 Vivica A. Fox and 50 Cent really need to smash one last time to release this pent up sexual tension they have, or move on already. It’s been more than a year since Fox insinuated the rapper was gay and they are still trading petty barbs at each other on TV and social media.

50 Cent appeared on the Dec. 1 episode of Watch What Happens Live! alongside Leah Remini. Clearly stirring the pot, host Andy Cohen couldn’t help but bring up the year-long beef between his ex, which all started when Fox visited the show in November 2015.

The rapper was finally able to share his thoughts on the incident with Cohen and threw a little shade at Fox in the process.

“I wasn’t even on the show, and I was here. She put me on the show. That’s what happens when you get older in Hollywood…. I said to myself, personally Andy, I said, ‘Oh no, because I let her lick my ass she thinks I’m gay.’”

After a little bit of teasing from Remini, Fitty said he will be more careful about who he lets lick his ass. “I’m sorry. I’ll never do it again,” he said. “No one like that. No one who will go on television and say something crazy.”

Following his appearance, 50 posted a still from the episode on Instagram, highlighting he and Remini’s funny banter.

Fox responded on Instagram with a post of her own. However, she went all the way in. The meme she posted showed a photoshopped 50 Cent wearing makeup. She called him a “queen” and said he lied on TV because she was not the one who participated in any butt play with him. She even suggested the two go on WWHL together to put the whole thing to rest.

Tell you what @50cent since you keep on telling that lie!! I challenge you to let’s both go on @bravowwhl and we can put this to rest!! That NEVER happened and you know it QUEEN! But keep on telling them how u like it tho!! Let me know when u ready cause I am!! Part 2: Crazy how you 4got that u paid me to be in ya Video and went on the radio saying you did wrong by me! Boy oh boy when that VAULT opens up its gonna be good! I’ve got a great memory @50cent AKA #CurtisFox

It’s really hard to believe they’ve been going at this for over a year. Does anybody really care at this point, besides them? On his first show back since Fox’s IG shade, Cohen invited 50 Cent and the actress to WWHL so they can squash it once a for all. I hope they take him up on his offer.