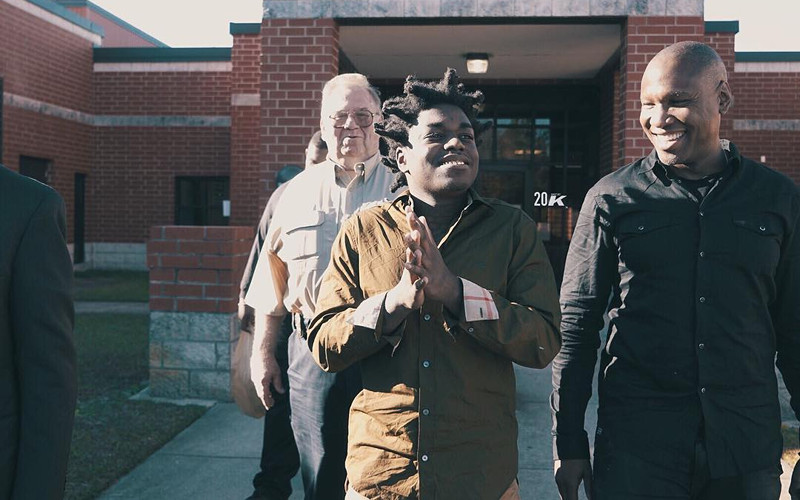 Kodak Black has been set free and is back home in Florida. The 19-year-old rapper has been released from a Florence, South Carolina jail after posting a $100K bond. He is facing criminal sexual assault charges.

Kokak posted a picture of his release on Instagram. “I’m happy to finally be going home to my family and friends. I look forward to clearing my name in the very near future,” he wrote while also thanking his team and fans for their support.

The rapper is accused of sexually assaulting a woman after a February concert in Columbia, SC. New details have emerged about the alleged assault.

According to the Sun Sentinel:

The accuser and a friend went back to the Comfort Inn and Suites in Florence to hang out with the rapper and another person, the woman told deputies.

After a few minutes, she and [Dieuson Octave — Kodak Black’s real name] went into a separate room by themselves, the woman told police. That’s when the attack began, between 11:40 p.m. Feb. 6 and 1:30 a.m. Feb. 7, the report says.

Octave pushed her onto the bed and then the floor, where he sexually assaulted and bit her, according to the allegations.

He told the woman he couldn’t help himself, as she screamed and tried to push him off her.

Kodak’s lawyers believe he will be “vindicated’ in the assault charges. And while released from jail, he will still be under house arrest and a five-year probation from a previous, unrelated charges.

Kodak’s release has sparked many reactions from social media, making “Kodak” a worldwide trending topic on Twitter, and briefly the no. 1 topic in the US.

Kodak get out of jail and get straight on snapchat ? this is what this generation has come to

Kodak free so now we can get this song pic.twitter.com/mlvLxh9b1n

How much bread did Kodak eat in jail

Kodak’s next South Carolina court date is scheduled for Feb. 8.