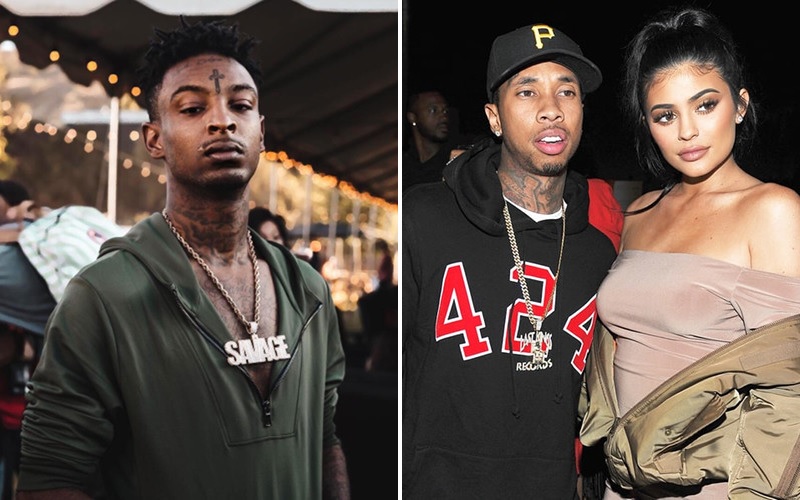 It’s been somewhat of a hot-n-cold between the couple, but Kylie Jenner and Tyga seem to be in a good place. Or are they? The internet is convinced Kylie is caught in the middle of a love triangle all thanks to rapper 21 Savage.

21 Savage caused the stir around midnight Tuesday morning (Nov. 22). He posted a photo on Twitter of Kylie modeling only a shirt from her clothing line. He captioned the photo with three heart-struck emojis.

This might not seem like a big deal, but the rapper has not been shy about his lust for the youngest Jenner sister. Earlier this year, he tweeted Tyga wasn’t good enough for Kylie and she was going to be his.

Kylie Jenner Gone Be Mine
She Need A Real Savage

Putting all the pieces of the (alleged) puzzle together, social media also noted that Kylie Snapchatted a video of herself listening to 21’s music. She used the caption, “Savage Mode.” 21 Savage fans have since swarmed Tyga’s social media accounts, by posting knife emojis (a reference to 21’s famous tattoo) and “21.” Some have even left mathematical equations that equal 21. Social media has also poked fun of the fantasy love triangle with memes and jokes.

Tyga not gonna fight 21 Savage for Kylie. He might as well cut his losses and break up now

Kylie and Tyga have yet to comment on 21 Savage or the social media gossip. Till then, let’s continue to laugh at the mere thought of a Tyga vs. 21 fight.