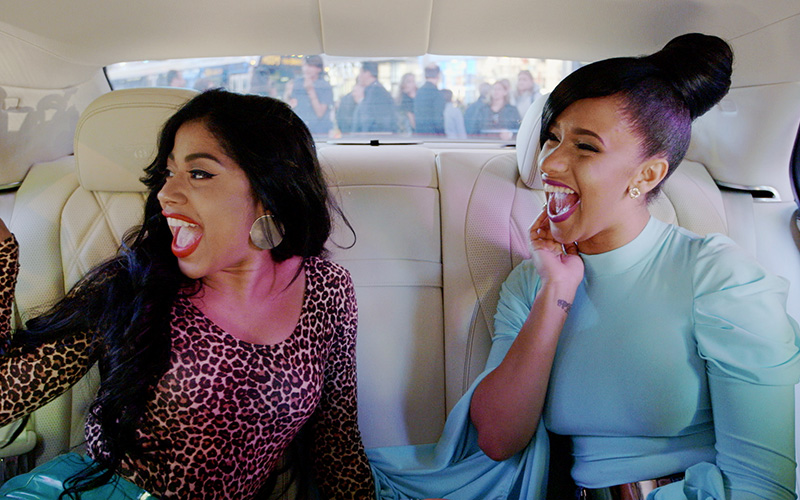 The seventh season of Love & Hip Hop (New York) doesn’t premiere until Monday (Nov. 21), but thanks to VH1, you can watch the first 7 minutes of the show right now.

We get introduced to Cardi B’s little sister Hennessy as she and Cardi ride through Times Square getting hollered at by random guys and talking about the haters. The sisters also discuss Cardi’s incarcerated boyfriend and whether or not she should hold him down while he’s locked up.

Next, we catch up with Rich Dollaz, DJ Self and Cisco as a new member of “The Creep Squad” is brought into the mix. We could tell you who this “new member” is, but that would just spoil the surprise.

Watch the first 7 minutes of LHHNY below:

And be sure to watch the whole episode this coming Monday night when it airs on VH1 at 8/7c.

About LHHNY Season 7 (via press release):

Newcomer Felicia “Snoop” Pearson, best known for her work on HBO’s “The Wire,” and girlfriend J. Adrienne are ready to take NYC by storm. Will J’s jealousy issues and Snoop’s aggressive fans get in the way of their happy ever after?

Kimbella returns with rapper Juelz Santana. The couple has finally found some peace within their turbulent 6-year relationship. As Juelz prepares to make his comeback, Kimbella grapples with burying past demons and curbing her trust issues.

Hot off her single “Foreva,” Cardi B heads out on tour to promote her mix tape but finds navigating her new fame difficult. Thankfully, with the help of her sister Hennessy, Cardi uses her signature charm and unwavering humor to laugh off any stressful situations. With a new producer by her side, will Cardi be able to stay faithful to her boyfriend or will the lines between business and pleasure blur?

When Remy Ma and Papoose said their vows in front of millions, they were on top of the world, and now… they’re all the way up! With the success of Remy’s summer anthem and her career nowhere near slowing down, Pap continues to remind Remy of her promise to give him some “bundles of joy.”

Last season fans sympathized with Yandy Smith-Harris as she said a tearful goodbye to her husband, Mendeecees. This season follows her as she works to keep the family together after Mendeecees’ exes Samantha Wallace and Erika DeShazo join the cast.

Though MariahLynn and Bianca have each seen great successes in their respective music careers, their friendship is put to the ultimate test when loyalties are questioned.

Juju, author and girlfriend of rapper Cam’ron, steps onto the scene looking to shake things up.

Hot 97’s DJ Drewski and his fitness guru girlfriend Sky Landish make their “Love & Hip Hop” debut as an interracial couple learning to balance work and play in the hip hop industry. Meanwhile, Bianca finds herself attracted to Drewski and struggles to respect the boundaries of his relationship with Sky.

There are cracks in the creep squad this season as we see Rich, DJ Self, Peter and Cisco deal with conflicts over artists and women.