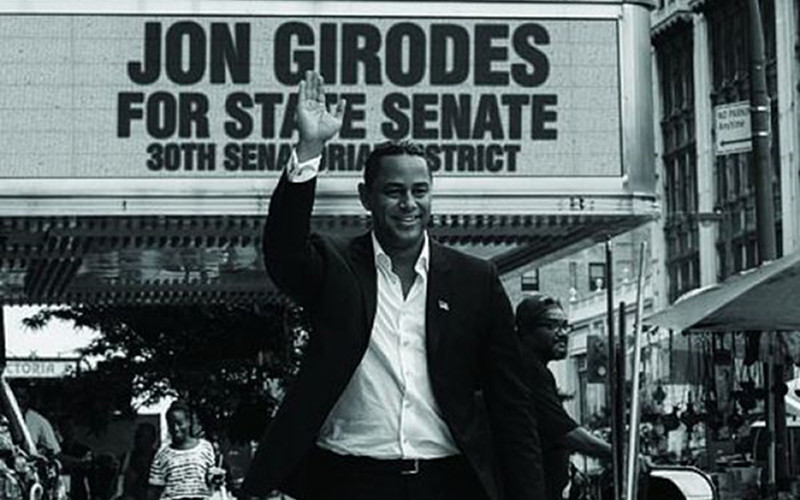 If you thought you’ve seen (and heard) it all during the 2016 election, meet New York State Senate candidate Jon Girodes. The Republican is running for New York’s 30th District and promised to provide watermelon and fried chicken and at campaign event in Harlem.

Yep, you read that correctly. It’s 2016 and this man running for office is really trying to appeal to black people with fried chicken and watermelon. Girodes mentioned the event in an email to NBC 4 reporter, Sarah Wallace, who was contacting Girodes to discuss a rent scam he’s been accused of.

“Ps I’m hosting an event in Harlem which will be in front of the state building in a few weeks. We will [donate] Kool Aid, KFC and watermelons to the public on 125th street in Harlem. Please join us to help the community.”

Wallace printed out the email and then asked residents near the planned event their thoughts. Not surprisingly, the Harlem residents were outraged.

Despite the fact that the stereotypical and racist connotation behind these foods are known to basically everyone, Girodes claims otherwise.

“What I think is anyone who gives free food to people is doing them a favor. Get a bunch of people who say it’s offensive and let me go into their neighborhood and give it out for free and see if they take it.”

But wait, this story gets even crazier. Remember the “rent scam” I mentioned previously? Well, the candidate was arrested Friday (Oct. 14) for stealing a total of $50,000 from 10 people!

Girodes faces several grand larceny charges after listing his luxury apartment on Craigslist and pocketing rent deposits. Police say Girodes would ask for a year’s worth of rent and other expenses up front and then back out of the deal. Creepily smiling while handcuffed and being placed into an unmarked SUV, he said “I love the NYPD, but there are two sides to every story.”

I thought it couldn’t be done, but this racist Republican scammer is even more unelectable than Donald Trump.