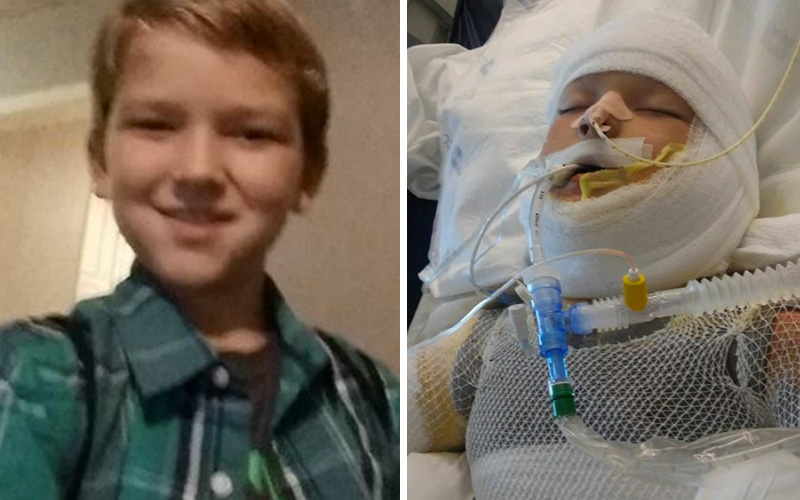 A 10-year-old special needs boy from Kerrville, Texas is in critical condition after a group of bullies he thought were his friends lured him to a shack, doused him with gasoline and set him on fire Sunday (Oct. 2).

Here are some things to know about Kayden Culp and the horrific attack:

1. Kayden suffered second degree burns over 20 percent of his body. Kayden was riding his bike Sunday afternoon when he met up with a “friend” who took to a field where other kids were waiting. One boy doused Kayden with gasoline and another lit him on fire.

Tristyn Hatchett, Kayden’s mother, told My San Antonio that her son was in a medically induced coma Wednesday (Oct. 5) at University Hospital, and doctors were treating him for second degree burns over 20 percent of his body, from his ears down to his belly button.

Kayden’s aunt, Tanya Kasper, told Fox News reporters that doctors were performing biopsies to find out the amount of skin grafts he would need to begin the healing process. “So, basically he’s still on life support,” Kasper said. “We’re just hoping his body fights this off.”

As of Wednesday, Kayden’s family said his condition hadn’t improved much and his organs were failing. His mother said he’s unable to breathe on his own, is being fed through a tube and fighting a possible lung infection.

2. Authorities believe three boys were involved in the incident, but only one so far has been arrested. At least three boys — ages 9, 10 and 11 — were believed to be involved in the horrific attack, though so far only one has been arrested.

According to San Antonio’s KENS 5 News, the one child taken into custody was charged with first-degree arson, but Kayden’s family is calling for everyone involved to face charges because the children were allegedly bragging about the attack.

“The kids are letting everyone know this was planned,” Kayden’s Aunt Tanya said.

3. Kayden’s family believes he was targeted because of his disabilities. Kayden’s Aunt Taynya told KENS that her nephew “wore a hearing aid” and “talked with a lisp.”

“I mean, he was challenged from the get-go,” Kasper said. “And for him to face this new challenge, it’s going to be overwhelming.”

Kayden’s mother said he also has trouble speaking and exhibits autistic tendencies, though he has never been clinically diagnosed.

His family believes that his disabilities made him an easy target.

“He needs justice,” family friend Ashley White said. “I’m praying it was an accident but, if it wasn’t an accident, justice needs to be served because no child deserves to go through what he’s going through. At all. Period.”

4. Kayden thought the boys who attacked him were his friends. Kayden’s mom, Trystyn Hatchett, 29, said she believes her son’s attackers should be in jail and charged with murder.

She told My San Antonio that her son is a “special guy” who’s “rowdy and liked to have fun.” She also said that Kayden considered the boys who attacked him his “friends,” but they would always pick on him.

“They would make fun of him and pick on him and tease him,” she said. “He was usually the brunt of that kind of joke, but he kept playing with them.”

Alike Richardson, another one of Kayden’s aunts, said: “They make fun of him. He gets beat up in Carver Park every time he’s goes up there. That’s just the way it is. The kids are really mean.”

Ashley White, the family friend, who reportedly lives near where the incident occurred, said she had seen Kayden playing with the kids earlier and called Kayden’s dad Bobby about it because she thought something was up.

“They later said a lady up the street had helped put the fire on Kayden out,” said White, 27. She said of Kayden, “He may have issues with the other kids from time to time, but he still likes to play with them.”

5. Kayden’s GoFundMe and YouCaring crowdfunding campaigns have been extremely successful. Tanya Kasper started a GoFundMe page for her nephew Kaden with a goal of $5,000. So far, campaign has raised over $20,000. She wrote, on behalf of “Team Kaden”:

First I want to open in a prayer and give Thanks to the Lord above that we can still be, beside your dear child as he goes through this new chapter in life. Kayden just turned 10 and is now facing a life change. He needs prayers and lots of support. We ask for help providing for financial assistance for our family. Money is something that will not fix everything, but it will give the parents a chance to stay beside him and his other siblings. Kayden is going to change the world and he is now a voice for other children that are dealing with a “bully”. Let’s do our part for Kayden. We love u sweet boy. #TEAMKAYDEN

Ashley Caliendo, another friend of the family, set up a donation page on the “Compassionate Crowdfunding” site YouCaring with a goal of $10,000. That campaign has so far raised over $160,000, bringing the number of financial donations to Kaden and his family (who will have to miss a lot of work while Kaden recovers) to $200,000. As a lot of you know, Kayden was burned in a tragic incident on 10/2/16. He has 1st and 2nd degree burns covering 20% of his body. He is currently on life support, has a feeding tube and is being kept sedated. He’s going to be in the hospital for quite a while enduring something no person, let alone a child, should ever have to go through. During this time, Tristyn and Bobby will need to be by his side. We are asking for donations to help them with expenses that will arise while they are in the hospital with Kayden. This includes housing expenses, utilities, food, etc. They also have 3 other children at home that they will need to financially support while being in the hospital and not able to work. No amount is too small and if you can’t donate please pray for them, as it will be a long road to recovery for this sweet boy. There is an investigation pending at this time. Thank you all so much.

A recent update from the page reads:

Kaydens dressings were changed today. He has done fairly well. He has 3rd degree burns on his arm, neck and chest. He will be getting skin grafts tomorrow. He is fighting infection and pneumonia now. Blood pressure and heart rate still doing well. Please keep praying.