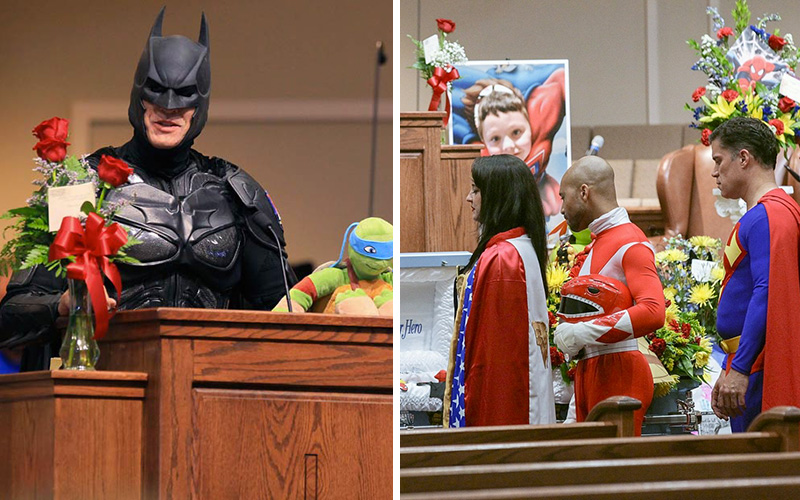 Jacob Hall, the 6-year-old who was killed during the shooting in Townville, SC, was laid to rest Wednesday (Oct. 5) with a superhero funeral. Friends, family, and members of the community gathered in the small town to pay their respects to the child who lost his life in yet another senseless shooting.

Hall’s family decided to have visitors dress as a superheroes in honor of Jacob’s passion. Crowds of Captain Americas, Batmans, Supermans, and more filled the church as Jacob laid in his baby blue casket donning the costume of his favorite superhero — Batman.

“Superman, when he was Clark Kent he wore glasses,” said Jacob’s great aunt, Rebecca Huniicutt. “He was clumsy. He was awkward…And I think that’s the way Jacob saw himself. ‘OK, me being Jacob, I can’t do everything I want to do. I can’t save the world. I can’t save Townville, but as ‘Catboy,’ when I’m my superhero, I’ve got it going on.” Hall’s funeral even had Batman himself show up in his Batmobile, as John Buckland of Heroes 4 Higher made the trip down from West Virginia to attend the funeral. And while the town is still reeling from this loss, Rob Sosebde of South Carolina Upstate Heroes said it best.

“A superhero is someone who does something extraordinary. Sadly, his extraordinary was cut short, but he did bring this community and a lot of people together.”

It was a heroic sendoff to a hero lost far too soon.