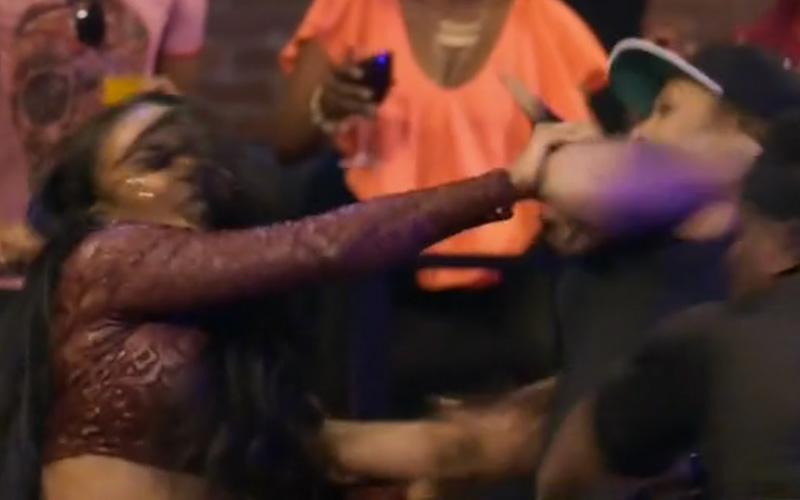 You have to pity some of the stars of Love & Hip Hop Hollywood. On the one hand, you know that this show is a steaming hot pile of ratchet mess and you expect to have to deal with some hoodrat perspectives and bad girl behavior.

But on the other hand, I don’t know if anything can prepare you to have your wig, literally, snatched off of your head and have your ass beat on national television.

Willie Taylor’s wife, Shanda, had to learn this the hard way as her dignity went smooth out of the window as her husband’s mistress embarrassed her ass on episode 5 of the third season of LHHH.

It all started out so beautifully and simply too. In a quest to live her life and crawl out from under Willie’s shadow, Shanda re-dedicated herself to her music career. No one even knew she was a singer last season, but there Shanda was doing her best Cassie as she whispered and cooed against a soothing alternative R&B beat. You couldn’t understand a damn word she was saying, but it sounded healing.

After Shanda’s set wrapped, she stepped off the stage to sit with her pal Teairra Mari to take in the rest of the other acts from the Open Mic session. Unfortunately, the next act to follow was her trash-ass husband’s mistress Kyesha Shalina. Kyesha takes petty to completely new levels as she spits a diss track that she wrote ABOUT Shanda directly to her face at the concert. As she gets to the halfway point of the song, Kyesha just drops all pretenses and lunges at Shanda and proceeds to whoop her ass. In the middle of their clash, Kyesha yanks and jerks Shanda’s wig clean off of her head, exposing her humble, corn-rowed head to the world. After security clears the scene, Shanda pitifully clings to the wig as it dangles from her head. The producers give her enough time to re-adjust and re-set her wig in the final shot before they move on to the next scene.

Although Shanda strikes a defiant pose, you can see that her pride and her dignity have been severely wounded. Lyrica and A1 Tie the Knot

So in a bid to smooth things over, A1 decides to put an even BIGGER ring on it, much to Lyrica’s delight, and then opt for a romantic elopement in the California dessert.

Although Lyrica is hesitant to go through with the elopement, since she knows that her mother will be devastated to miss the ceremony, ultimately she decides to put her and her fiancé first for once and she ties the knot with her boo thang.

As far as LHH weddings go, it certainly wasn’t the most over-the-top ceremony the reality series has seen, but it’s always nice to see weddings and love on the show instead of heartache and divorce.

The secret about Nikki Muddaris’ bisexual lifestyle is becoming harder to keep a lid on. Safaree, Nicki Minaj’s ex-boyfriend, claims that he’s a one-woman man and he gets the feeling that there’s another person involved in Nikki’s life besides him.

So he seeks Fizz out to see if he can shed some light and insight on what it’s like to date Nikki.

Fizz is all too happy to let Safaree know that Nikki was always too busy and aloof with him as well and afraid to commit. Armed with this information, Safaree confronts Nikki while she’s doing a photo shoot for the men’s edition of her Nude by Nikki underwear (what man would seriously buy underwear made by “Nikki Baby” btw?) and he demands answers.

Like a true boss-ass pimp, Nikki tells Safaree that he has no business and no basis to question because they JUST started getting to know one another. Also, she adds, he’s been actin’ real Bug-a-Boo-like, blowing up her pager and her cell phone and she’s sick and tired of it.

In all honestly, this whole supposed tension between Safaree and Nikki is clearly fake, but it’s fun to see a woman in this role, playing chess with her lovers. So we’ll go along with it, even though we know Safaree is nobody’s one-woman man and Nikki is not really a bisexual. Well, let me correct myself, Nikki probably truly doesn’t mind eating another woman’s box out or rolling in the hay with women in general, but there’s no way she truly desires an exclusively romantic relationship with a woman long term.

Like Erica Mena, you can snap your fingers and expect to see Nikki in the bed of another rapper with a new ring on her finger before the next season hits.