GOSSIPONTHIS.COM Celebs Ms. Tina Lawson’s Instagram Will Give You Life 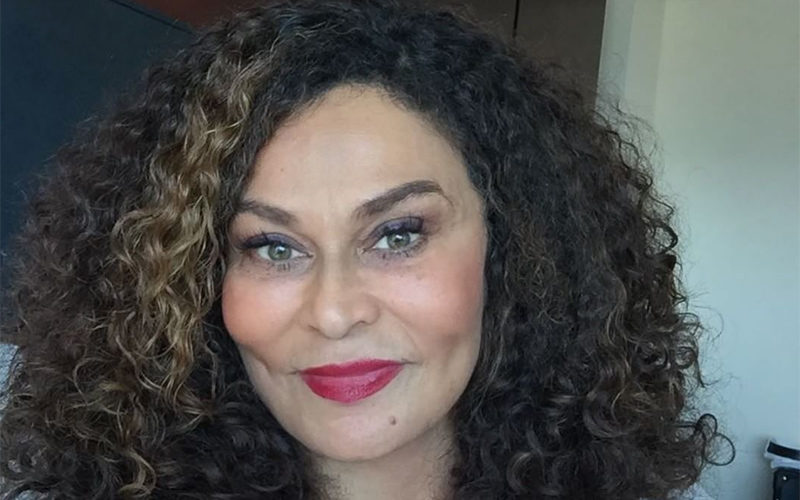 Beyoncé’s mother, better known as Ms. Tina Lawson, has truly become a social media butterfly in recent years. While Tina has always been a background player in her daughter’s success story, content with doing hair and sewing glittery bustiers, now that Ms. Tina has discovered the power of the ‘Gram, she can’t stop and won’t stop.

Here are a few beautiful things you’ll find if you bless yourself and hit follow on Ms. Tina’s IG profile.

1. Ms. Tina Will Rock Whatever Ugly Shit Her Grandbabies Make With Pride

My Beautiful granddaughter Blue made this necklace and eye jewels for me ! We've got the next Lorraine Schwartz in the making!❤️

Somebody gave Blue Ivy a glue gun and some fake crystals and that lil’ girl gave it to her nana and said wear it. And you know what? Ms. Tina rocked that crooked necklace and slapped those bedazzled jewels on the side of her face and called them eye jewels and gave y’all a fierce selfie for the ‘Gram. This glam-ma will do anything for her grandkids.

2. Ms. Tina Is Not Afraid to Feed Her Man In Front of You

Yes, that is Ms. Tina feeding her husband Richard Lawson some fresh watermelon on the beach. Yes, that is a lightly veiled reference to her daughter’s line about “watermelon” in “Drunk in Love,” which was also filmed on a beach. Yes, Ms. Tina is giving you sexual metaphors in a classy way.

3. Ms. Tina Likes to Show Off Her Famous Friends

Ran into one of my favorite people ! The beautiful and talented Monica Brown. I've known her since she was 15 years old . She is still the same sweet , strong , smart and down to earth person ,But don't get it twisted she will check you if you deserve it❤️

While Monica is enjoying a buzz from the viral #SoGoneChallenge campaign, she was blessed before with the presence of Tina.

4. Ms. Tina Still Keeps It Classy with Her Ex

Mathew Knowles, her ex-husband and Bey’s daddy, did Ms. Tina SO, SO, SO dirty. He went around the country raw-dogging all kinds of thots, which resulted in various offspring and numerous child support claims. But Ms. Tina knows that despite Mathew’s mess, she still has a bit of respect for this man who helped her to create the divine creature that is Beyoncé. So she cuts him some slack and politely gives him space on her IG every once in a while.

5. Ms. Tina Will Give You Some Karaoke

Chilling with my baby to our favorite song on the Balcony in Nola. Seems like a second line should be coming soon😄 And yes I know I don't sound good but God said make a joyful noise and when I hear Marvin Gaye saying Jesus is his friend❤️I am truly joyful😄

Beyoncé’s vocal cords are blessed. Solange can carry a tune. Ms. Tina? Not so much. But it’s fun watching her give it a try anyway.

Happy Wednesday, this is a design by a young designer I'm soo impressed with 🌷 His name is Jerome LaMaar! I co-chaired a fundraiser in Houston last weekend called for the sake of art . You had to have your clothes look like art . This was perfect ! Check out this young talented designer He has been at it since 15 years old . He started with the inovative Russell and Kimora Simmons.

Yes, that’s a 62-year-old woman and mother-of-two that you see above you with that itty bitty waist. Can you handle it?, as her daughter famously asks in “Bootylicious.”

Michelle My Belle ❤️Happy Birthday to a Talented and beautiful inside and out young woman🌷 I love you!

The beach and the boats, beautiful in Spain

Mathew Knowles may have messed things up with Tina, but her new husband Richard Lawson seems to be the love of her life. Tina is always snapping selfies with her boo, just to let all these hos know that she’s got it on lock.

Let's all say a prayer for the family of Mr. Alton Sterling . ❤️ Let's also pray that there will be justice served , and that the senseless killings will stop! I notice that some of you are saying you are tired of praying and I understand the frustration I am deeply saddened and frustrated too! But I know firsthand the power in prayer and will never stop praying!! I do believe there has to be some action to go along with the prayer. Everyone in this country that feels these actions have got to stop,and I mean from all races and ethnicities we need to stand together and sign petitions in your City. Contact your congressmen and march on city hall . You don't have to be a celebrity to do that you referenced celebrities becoming Malcolm X . He and Martin started out as ordinary men . Anyone with the passion and drive willing to make the sacrifice can be a leader . It is easy to point the finger and say what someone else should be doing . What are YOU going to do? I must add that all police officers are not bad . Saying that all of them are bad is like saying all black people are ? or all Doctors are ? And on and on . There are good cops and there are bad cops like with anything else . Let's work to get the bad ones punished . Let's support the good ones. We need them to protect us. Let's get out and register to vote please . That's how our voices can count. Let's do our research on how many killings have occurred and to whom and how . Put together a video of all the unjust killings . Find your local Black newspaper write an article chronicling all the senseless deaths and the circumstances in which they occurred . Hold a peaceful rally in your town . Together we can make a difference. Please no violence it only brings about more killings of more Innocent people. Love not hate can heal the world.❤️

While Ms. Tina loves to have a good time, she also uses her voice and platform to raise awareness about a variety of issues and causes. When Alton Sterling was killed, she mourned his death. With the floods wreaking havoc in Louisiana, she called for aid. Ms. Tina cares.

10. Ms. Tina Is Always Good For a Throwback Thursday