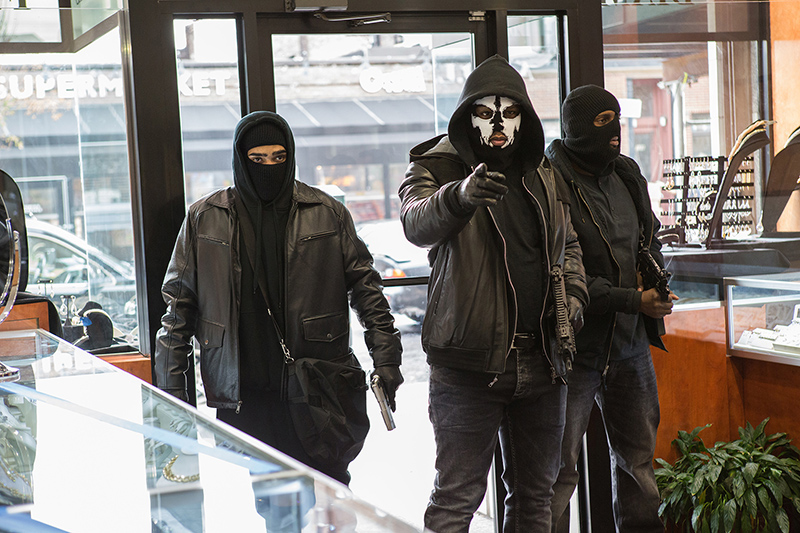 In last week’s episode of “Power,” we finally learned of Kanan’s whereabouts and were introduced to his dirty cop cousin Jukebox. Tariq brings a gun to school and comes close to getting expelled until Tasha goes into “mama bear” mode and shuts down the principal. Holly finds out she is pregnant and Tommy has no clue of what’s going on.

This week’s episode shows Ghost having to come to the rescue and save Tommy, Greg getting closer to nailing Lobos and revealing his network (including Ghost and Tommy), and Kanan is back in full effect. Also, Holly continues to be insufferably intolerable.

Here are some things to know about the episode:

1Tasha is staying true to her word about the kids not being allowed at Angela’s.

In the opening scene in the episode, Ghost and Tasha talk over the phone about Tariq having to attend therapy for bringing a gun to school. During their conversation, Tasha complains to Ghost about not making the kids a priority, especially Tariq, who is becoming extra rebellious these days.

Ghost tells Tasha that he could make the kids a priority if she would allow them over Angela’s, but she isn’t going for it. Tasha snaps back at Ghost and reminds him that there are plenty of other ways he can see his kids without his girlfriend involved. She even jokes that she doesn’t need their daughter Raina coming home with a “fucking switchblade.” Good one, Tasha!

Tommy and Holly have raunchy, aggressive, ugly sex in their apartment, and it’s almost painful to watch. From both of their facial expressions, the uncomfortable looking sexual positions, and Tommy drooling all on Holly when he finally gets one off, this is arguably one of the weirdest sex scenes ever. Just yuck!

Jukebox meets with her crew and lays out the plans for an upcoming jewelry store heist. She gives each of the men (Dirk, Critical, Doc, and Frog) their role in the robbery and when Kanan interrupts the meeting and demands he be the fifth man, the guys question who he is and his authenticity. Jukebox introduces Kanan to the men as family and reminds them that she will be making all the decisions. Once everyone is gone, Jukebox tells Kanan that he has to prove to her that he can squeeze a trigger and whispers in his ear, “I bet you can’t even jerk off yet.”

When Jukebox leaves the room, Kanan asks Candie to give him a gun, so he can shoot off a couple rounds in the backyard. Candie tells Kanan that’s not what Jukebox wants him to do and from there, shuts the door and takes off her shirt, showing Kanan her pretty breasts and really huge areolas. She then instructs Kanan to jerk off and when he complies, she allows him to put his fingers in between her legs. For some odd reason, she really gets off to this, even though Kanan’s hands are all burnt and crusty.

After the fingerbang session, Candie gives Jukebox the news that Kanan’s hands work perfectly fine, “both of them.” Jukebox seems pleased.

4Ghost puts Angela in her place for visiting Tasha.

Angela pays Tasha an unexpected visit at her apartment and tries to apologize about Tariq finding her gun and taking it to school. She tells Tasha that she got Tariq’s record expunged after the school reported the incident to the NYPD. Tasha, however, is unfazed by Angela’s efforts to help Tariq, and tells her that she only did it to get brownie points with Ghost. She also tells Angela that as long as she is with Ghost, she will be cleaning up his mess.

When Ghost finds out about Angela talking to Tasha, he is furious and the two have a huge fight over the matter. Ghost even throws it in Angela’s face that Tasha is still his wife and that she has to ask for permission to talk to her. But before they could finish their heated conversation, Angela’s sister rings the door bell. She has arrived to have dinner with her and Ghost.

5Angela’s sister isn’t a fan of her relationship with Ghost.

When Angela’s sister Paz comes over to her apartment to have dinner with her and Ghost, it doesn’t take long to see she isn’t team Ghost. Paz knows Ghost from the past and has her doubts about their relationship.

As soon as she enters the room, she nosily goes through a stack of Angela’s papers and notices Ghost paid her rent. She questions Angela about having a man take care of her, which causes Angela to get a total attitude with Ghost over him paying her rent (Really, girl?! You need to be glad you have an extra $3.5K to play around with!) During dinner, Paz makes a big deal out of Ghost still being married and when he offers a job to her son at the club, she declines “in case things don’t work out” between him and Angela. What a kill joy!

6Kanan leads the jewelry heist and shoots Dirk like it’s nothing.

With Kanan the newly appointed fifth man of Jukebox’s crew, he forcefully leads the men into the jewelry store, where they wreck shop and steal as much as they can get their hands on. Dirk, who’s working inside the store, triggers the silent alarm and shows Kanan to the back where there’s a hidden safe with really expensive jewelry inside.

After Dirk unlocks the safe, Kanan collects the jewels before giving Dirk a final look and shooting him point blank in the head. He then runs back into the main room in the store and the men make a clear getaway. Jukebox waits a block away and when she gets a call about a robbery nearby, she reports a black explorer with four white men inside. Well played, Jukebox. WELL PLAYED.

Greg finally pinpoints Ruiz’s location in San Diego and pops up at his new job, where he is mopping floors. Ruiz pretends to have no idea what Greg is talking about or who he’s looking for. Greg lies to Ruiz and tells him that Lobos knows where he is and his family is in danger.

Greg also promises Ruiz that he can take his business back with the FBI’s blessing if he testifies against Lobos. When that isn’t enough to get Ruiz to squeak, Greg informs Ruiz that he heard that his father was sick. Later on in the episode, Greg reveals that Ruiz has decided to testify against Lobos and can help identify his whole network, including Tommy and Ghost.

Ghost and Andre sit down with Karen Bassett and she informs Ghost that in order to take his club to the next level he needs to develop and manage his brand on social media. Karen also tells Ghost that that she can’t set up a meeting with her board of directors until he does this. (“Your brand needs a face, I can’t sell a ghost,” she says.) Ghost takes Karen’s advice to heart and by the end of the episode, he is taking pictures with the club patrons and his face is all over social media.

9Tasha finds out Holly is pregnant.

Tommy and Holly stop by Tasha’s house and it doesn’t take long for Tasha to notice something weird about Holly. She pours out a whole glass of wine and is crying to herself, two huge sides of someone being knocked up.

Once Tasha realizes this, she takes Holly into the next room and drills her about being pregnant with Tommy’s baby. Tasha keeps it real with Holly about having a baby with a drug dealer and the possibility of raising a kid on her own. She also advises Holly to tell Tommy about the baby ASAP.

After successfully robbing the jewelry store, Kanan returns to Jukebox’s home to find her nowhere in sight and Candie in the kitchen all by herself. He gives her one of the items he stole and tells her she can sell it and won’t have to depend on Jukebox for cash anymore. Candie informs Kanan that Jukebox gives her everything she needs. Kanan asks Candie if Jukebox gives her “everything” (obviously referring to the “D”), and the two stare each other in the eyes before engaging in banging kitchen counter sex.

11Ghost stops the Korean cartel’s hit out on Tommy.

While in the club, Ghost gets a call from Andre who informs him that the Koreans are out to kill Tommy. Turns out, the hitter is Dylan, the Korean cartel leader’s son who had to cut his own finger off for stealing product and selling it on the side. He absolutely hates Tommy’s guts since he snitched on him , and when they meet in this episode, Tommy compares Dylan’s newly shaved head to being smooth as his ball sack (damn that’s disrespectful) and even when Dylan apologizes to Tommy about the mishap, Tommy squeezes his injured hand so tight that you hear his knuckles crack.

It’s clear Tommy doesn’t let up on this guy, and his non-giving a flying fuck attitude almost comes close to biting him in the ass when Dylan and his shooters pull up on Tommy after his meeting with the dirty priest and fire out several rounds, hitting him in the shoulder.

But before they could finish the job, Ghost comes out of the shadows and shoots Dylan and another man in the passenger seat. He spares the driver and allows him to get away. From a distance, Ghost’s new security guy is watching the whole thing go down, which could be a major problem later for Ghost.

12Jukebox makes Kanan change his plans to get back at Ghost.

While hanging out at the strip club together after the jewelry store heist, Jukebox admits to Kanan that she knows he fucked Candie and tried to swoon her behind her back. She tells him that he could have just asked in the first place, to which Kanan responds next time he will, but she quickly informs him that there won’t be a next time and that the job is over. She tells him that he should rethink his plan to kill Ghost and that Ghost is more valuable to him alive than dead. She also tells him to ask himself, “What did Ghost really take from me?”

13Holly puts a hit out on Ghost.

Tommy returns home and Holly finds out he has been shot. He grabs a beer and tells her that is was Lobos who came after him. Holly plays it cool, and tells Tommy she is going to get bandages and peroxide for his injury. Instead, she goes to a Jamaican restaurant, and after making it known she’s not there for food, she is instructed to a private area where she meets with a man who demands cash before they talk. After she forks over the bread, the man asks who is the target. Holly answers James St. Patrick and hands over a picture.