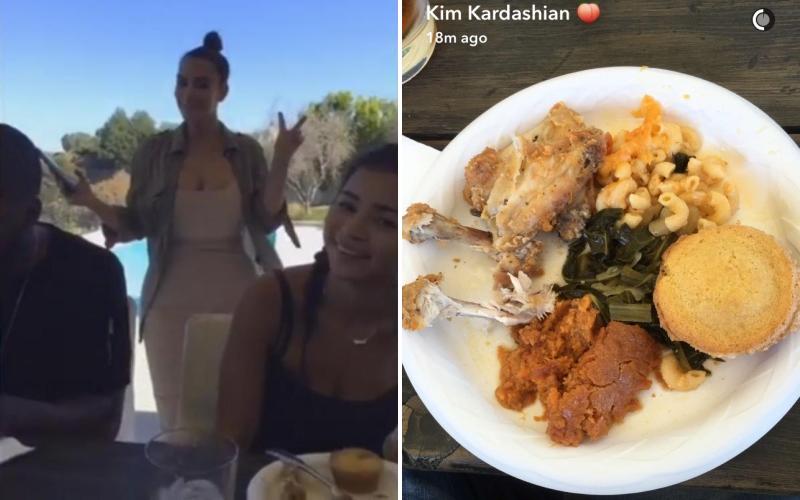 So, Kim Kardashian is still trying to convince us to let her bring the potato salad to the cook-out. For the past few weeks, the reality star has been Snapchatting the “soul food” meals she cooks for Kanye West and friends.

Her latest #SoulFoodSundays effort was a feast for black celebrities like Kevin Hart and Terrence J, who seemed pleasantly surprised. Keep in mind that both of them are actors, though.

Kardashian can’t help but to share all aspects of her life on social media, but she doesn’t seem to take the hint when it comes to her “soul food.” Actually, it’s not even a hint; Black Twitter has completely destroyed Auntie Kim over her recent attempt.

as soon as Kim Kardashian turned her snapchat off #SoulFoodSundays pic.twitter.com/3wsWXfTQQ8

I'm so dead Kim K really invited every nigga she knew to prove she can cook soul food. She even used styrofoam plates, I'm so done.

In all honesty, it does kind of look like everyone there was being held against their will. However, Hart praised Kardashian’s cooking skills on his own Snapchat. Pay close attention to his children and fiancé’s response/reactions.

Yeah, we know you lyin’.

We’re also hearing that, with encouragement from Kanye, Kim is considering writing a cookbook. At the very least, she has hinted at including cooking tips on her app. Newsflash Kim: just because you’re married to a black man and have spawned two black children, does not mean you can suddenly cook soul food.

Wait till next week for anther #SoulFoodSundays at the West house. I’m sure we’re all going to get another good laugh.