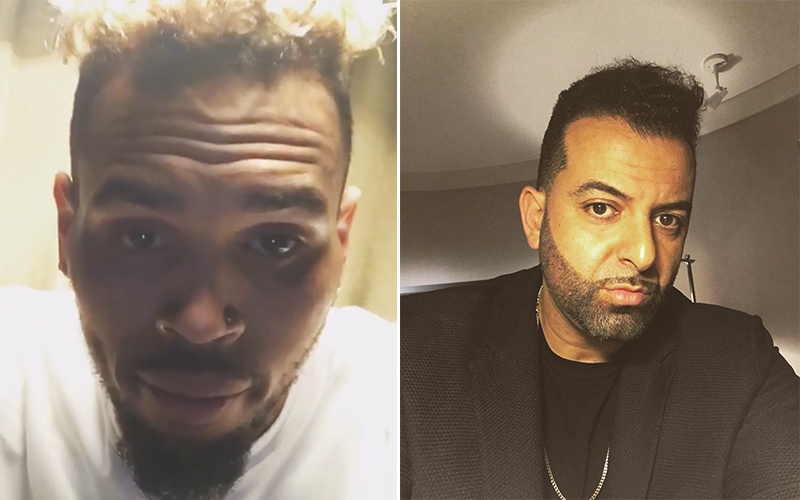 Adding to his growing list of former friends—which includes Kevin McCall and Drake—Chris Brown recently booted his manager, Mike G. The move was done quietly as it didn’t gain too much press at the time, but now, Mike G is swinging back and claiming that Chris Brown BEAT HIM UP.

Mike G is the man who helped rehabilitate Chris Brown’s image after the Rihanna incident, you know which was the first time we learned that Chris had issues with keeping his hands to himself.

Mike G claims he was hired in 2012 not only to change Brown’s image but to get him out of debt and off drugs. Mike G says he did well by Chris, who had a resurgence in popularity.

Things allegedly turned bad last month, but Mike G claims without provocation, Brown took him in a room, brutally attacked him with repeated punches to the face and neck, which landed him in the ER.

The lawsuit claims Brown, rather than being remorseful, began mocking Mike G on social media and bragging to friends about the beating. Mike G says Brown had the audacity to tell people working on his tour, if they got out of line he’d beat them just like he beat Mike G.

Ouch. And it was all good just a few weeks ago. Check out this Instagram post Mike G put up in honor of his “brother for life” for his birthday.

Or this photo shoot of Team Breezy Management from the Royalty photo shoot.

So how did Chris Brown take the news? Did he release a calm and collected statement through his PR rep? Did he politely offer a no comment response to media inquiries? Did he keep his mouth shut and let his lawyer handle it? No, Christopher did not.

He decided to take his response to Instagram, where he recorded an unhinged video that HE thought was funny and hilarious, but really just backed up Mike G’s assertions that all is not well with Chris.

Can we stop and talk about the fact that the top of Chris’s hair looks like McDonald’s fries while the bottom looks like burnt hash browns? Cause that hair is a mess.

Accusing a manager of “stealing” money from you is the oldest trick in the book in Hollywood. Chris probably couldn’t even count to ten backwards if his life depended on it so there’s no way I’m believing he caught Mike G in some accounting scheme.

The real gag though is that Mike G’s lawyer said thanks to Chris’ stupid rant, they’ll be adding defamation to their list of claims in the suit.

Christopher Maurice Brown is his own worst enemy, ladies and gentlemen.