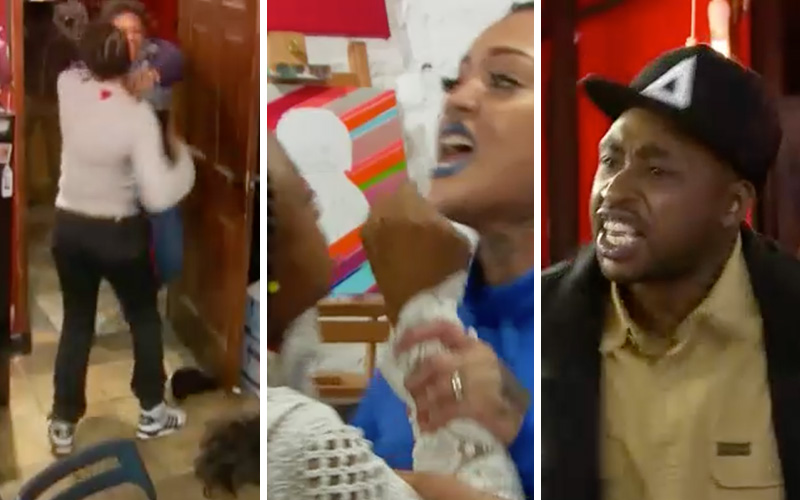 “Black Ink Crew” should be called “Black FIGHT Crew” because, boy, do these people know how to brawl.

Between Sky snatching Rashidah Ali’s wig, Naeem from Ink 124’s deaf girlfriend/baby mama Alexis throwing hands with Donna, and Ceaser losing his sh*t and getting THIS close to knocking O’Sh*t’s head off for being O’Sh*t … this week’s episode of Black Ink Crew was too turnt for words.

Before this season of Black Ink Crew premiered, we were treated to a drama-filled 4 minute trailer, in which we were warned of an upcoming fight between Sky and Rashidah Ali (from Love & Hip Hop New York and whatever reality show she can get her face on).

Well, after 11 episodes, the fight finally happened, and it was just as entertaining as we imagined it would be. As we previously reported, Sky and Rah Ali had been beefing since last summer … OVER EYELASHES. You can read the backstory on all that ridiculousness here.

For whatever reason, Rah Ali thought it would be a good idea to get a tattoo touched up at Black Ink. Out of the many tattoo shops in New York City, she decided to visit Black Ink, and not only that, but homegirl actually ASKED for Sky. So, without hesitation, Ceaser calls Sky, and not too long afterward, she walks in dressed in her finest beat-a-bitch gear.

“Why you dressed like you came to bang?” Rah asks foolishly. Girl, YOU KNOW WHY. Within seconds, Rashidah Ali’s wig ends up on the ground and Ceaser is left confused as hell. “Honestly, I didn’t expect the shit to get so out of fucking control,” he says. “How the f**k do you get from eyelashes to black eyes to motherf**king quickly?”

Because hoes will be hoes, Donna has found herself smack dab in the middle of another Black Ink Crew relationship.

Apparently, Donna and Black Ink rookie Naeem (who works in Puma’s “Art2Ink” shop) have a little history. Their story is that they knew each other long before his baby mama Alexis, who is deaf, came into the picture, and they had sex way back when … but ain’t nobody stupid. We all know they’ve f**ked recently.

Anyhow, at one of Black Ink’s many parties at the shop, Sassy sparks a conversation with Alexis about Naeem and Donna, and Sassy slips up and tells Alexis that Naeem and Donna used to mess around back in the day. Apparently, this is news to Alexis because Naeem told her that he’s never slept with Donna. **Dun dun dun**

Now, Alexis is “on a warpath,” as Naeem put it, and she confronts Donna straight up. And this is also where things get pretty interesting. Alexis is deaf, so she can’t physically raise her voice, but her body language and aggressive hand motions are loud enough, and Donna was not here for all of that.

“This is CRAZY, I’ve never had a deaf girl yell at me,” she says to the camera in her one-on-one. “Her hands are like an inch away from my nose. You need to use your inside hands, not your outside hands.”

From there, things escalate even further and when Donna mushes Alexis’ hands from her face, all hell breaks lose. Alexis swings, Donna swings back, and then Naeem tried to jump in like a light-skinned savior. (Boy, bye.)

THUG TEARS: Ceaser is Tired of O’Sh*t’s Sh*t, and He Completely Loses His Sh*t!

One of the best aspects of “Black Ink Crew” is the raw emotion we get to witness on any given episode. In this one, Ceaser has reached his breaking point with O’Sh*t, who has no problem showing off the fact that he gives no f**ks.

Ceaser hasn’t heard from O’Sh*t all day, and to make matters worse, O’Sh*t has left yet another one of his clients hanging by missing another appointment, which, as Ceaser points out, not only reflects badly on him, but the shop as a whole.

When O’Sh*t finally walks into the shop, Ceaser asks him where he’s been. His response? “I was just having sex with my lady, you know? Getting crazy with it.”

With that, Ceaser completely loses it and blows up at O’Sh*t, tossing tables and chairs and anything else within reach.

O’Sh*t tries to apologize but it’ too late. Ceaser doesn’t want to hear it. He retreats to the back of the shop to shed thug tears in the bathroom, after punching a wall, and O’Sh*t does some crying of his own outside on the stoop.

What is the meaning, when thugs cry? 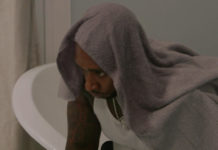