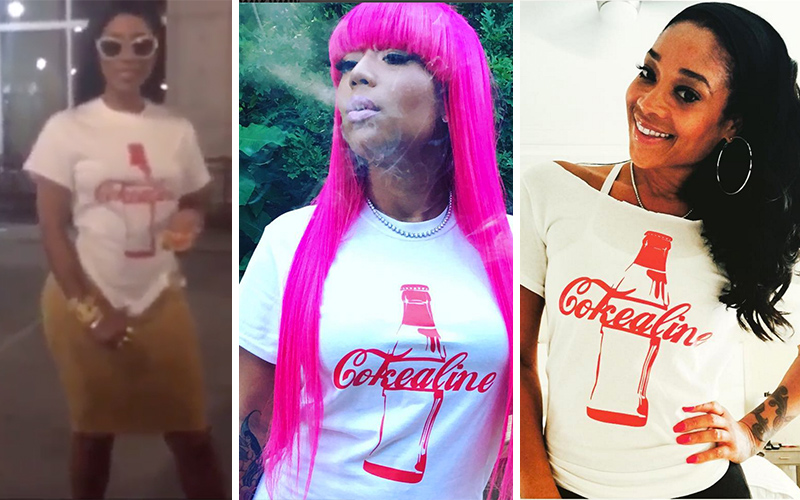 They say revenge is a dish best served cold, and if so, the ladies of Love & Hip Hop Atlanta are serving up a dish that’s at sub-zero temperatures for Ms. Joseline Hernandez.

It’s no secret that Joseline has made few friends on this season of LHHATL. Even her mainstay friend, Karlie Redd, found herself on the outs with Joseline as Ms. Hernandez toyed with poor Karlie like a cat does to a stinkin’ rat.

But more recently, Joseline got INTO IT with one-time LHHATL cast member Premadonna. While Premadonna and Joseline had a pretty dead-even clapback session on Instagram, Premadonna has decided to up the ante by calling on Joseline’s fiercest rivals Tommie Lee, Jessica Dime and Mimi Faust, her husband’s baby mama, to wear a t-shirt she’s launched called “Cokealine.”

The shirt is available through her e-commerce site, Waistgang Society.

The shirt is a dig at Joseline, attempting to explain and/or link Joseline’s traitorous and erratic behavior due to a cocaine habit.

But the t-shirt itself doesn’t really make much sense in that regard since it features a bottle of Coca-Cola and not, you know, an image of a cartoon Joseline in front of a pile of cocaine like a Puerto Rican Coke Wonder Woman or something. But nonetheless, Tommie, Jessica and Mimi had a blast with their Joseline Hernandez shade campaign.

Tommie kicked it off with a quick shade session on Snapchat, which The Shade Room picked up.

Then Mimi followed with a sly smile on her face.

And then Jessica Dime came in for the kill with her pink wig and thick ass.

How did the Puerto Rican Princess respond to all of this social-fueled hatred?