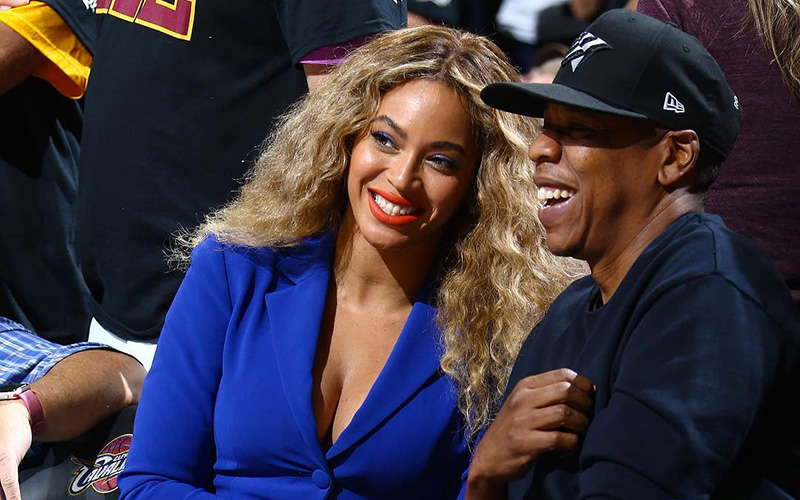 Well, now we know why LeBron James played so well Thursday night (Jun 16) … Beyoncé was in the muh-fuggin building! Oh, yeah, and Jay Z was there too. But we all know who LeBron was trying to impress. Wink wink.

Beyoncé and Jay Z jetted to Cleveland to watch the Cavaliers take on the Golden State Warriors in Game 6 of the 2016 NBA Finals. Bey looked ***Flawless, as usual, dressed in an electric blue suit and Jay Z rocked a fresh pair of white Air Force Ones with an all-black shirt and ripped pants.

Fans snapped a few pics and recorded a little video footage of the couple as they made their way to their seats, where they were all smiles as photographers snapped photos of the couple in their first public appearance since Beyoncé dropped Lemonade. If there was any question about the state of their romance, let these photos tell it, THEY GOOD. And this is how Mr. and Mrs. Carter reacted when they ended up on the jumbotron:

Lebron James and the Cleveland Cavaliers went on to defeat Steph Curry and the Golden State Warriors, 115 to 101, but Bey and Jay were already gone by then because they left at halftime.

Beyoncé is currently on break from slaying 30,000+ seat sports stadiums with her “Formation World” Tour, which ended its North American leg Tuesday night (Jun 14) at Ford Field in Detroit. The European leg kicks off later this month (Jun 28) in Sunderland, England.

According to Billboard, the Formation Tour made over $100 million in its first week of sells, with shows in New York City and Los Angeles selling out in mere minutes. The tour was such a success that Team Bey decided to add additional North American dates in the fall. The tour concludes October 2nd in Nashville.

Check out more pics of Beyoncé and Jay Z courtside at NBA Finals 2016 Game 6 below: