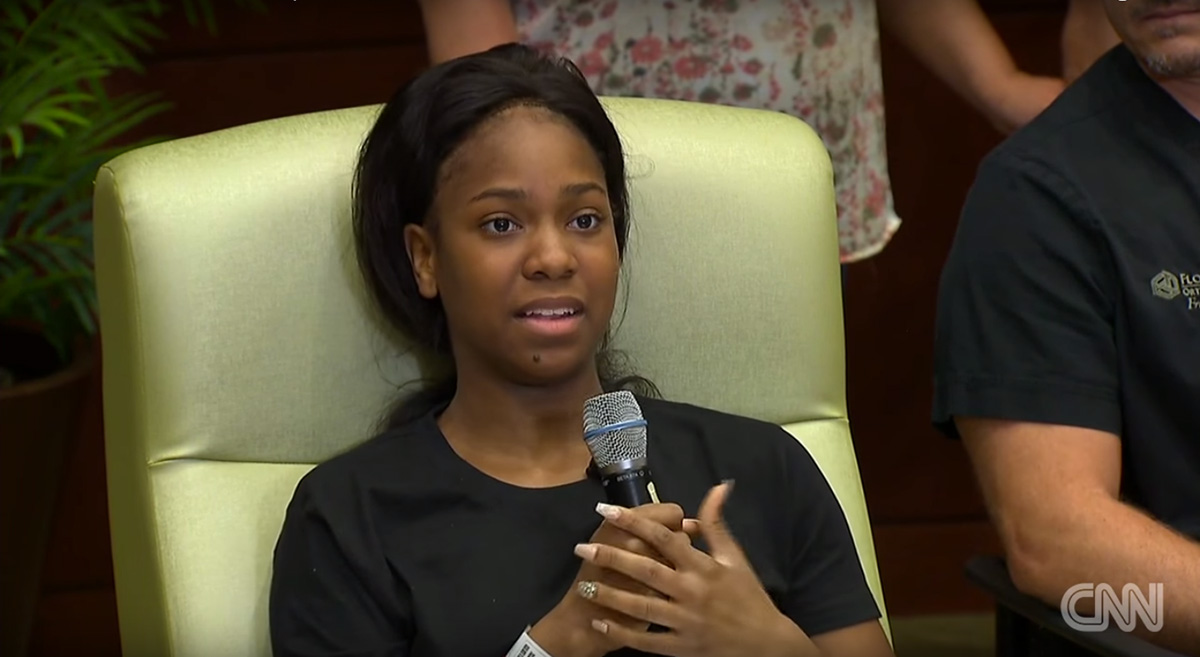 One of the survivors from the deadly shooting at Pulse nightclub in Orlando this past weekend says the gunman, Omar Mateen, didn’t have a problem with black people.

While in the hospital recovering from a gunshot wound following the tragedy, 20-year-old Patience Carter spoke with the media earlier today and gave shocking details about what went down as she was held hostage in the club’s bathroom.

Patience, a college student from Philadelphia and an intern for Philly’s Fox 29, says she and her friend Akyra made it out the club when they first heard gunfire, but ran back inside to find her other friend Tiara who came with them.

From that point on, Patience, her friend Akyra, and other club patrons got trapped in a women’s bathroom with the shooter Mateen, where she says he pledged his allegiance to ISIS and told a 911 operator he wouldn’t stop killing until America stopped bombing his country.

“The motive was very clear to us who were laying in our own blood and other people’s blood. He wasn’t going to stop killing people until he was killed, until he felt like his message got out there,” Carter said.

After hanging up the phone with 911, Patience says Mateen asked the hostages in the bathroom if there were any black people in the room.

“Are there any black people in here?,” Carter says Mateen said.

Though Patience says she was too afraid to answer, another African American man spoke up and said yes, to which Mateen responded his issue was not with black people and that they have suffered enough.

“He said are there any black people in here. I was too afraid to answer, but there was an African American male in the stall where the majority of my body was, and he said, ‘Yes, there are about six or seven of us.’ And the gunman responded back to him saying, ‘You know, I don’t have a problem with black people. This is about my country. You guys have suffered enough.’ He made a statement saying this wasn’t about black people, the reason why he was doing this.”

Carter also described the bathroom in Pulse as a bloody scene with bodies all over the floor. She says shortly before police killed Mateen, he fatally shot three other people, one of which shielded her from being hit.

“If it wasn’t for that person shielding me it would’ve been me shot and I wouldn’t be sitting here today,” Carter said.

Carter’s friend Tiara Parker was injured during the mass shooting but survived, her other friend Akyra Murray (who just graduated from a Philly high school) was killed. Tiara and Akyra were cousins. They had all traveled to Orlando together for a family trip and decided to go out on their first night of vacation.

Patience also wrote a poem about the guilt of surviving the incident.

The guilt of feeling grateful to be alive is heavy
Wanting to smile about surviving, but not sure if the people around you are ready.
As the world mourns the victims killed and viciously slain
I feel guilty about screaming about my legs in pain.
Because I could feel nothing
like the other 49 who weren’t so lucky
To feel this pain of mine.
I never thought in a million years that this could happen.
I never thought in a million years that my eyes could witness something so tragic.
Looking at the souls leaving the bodies of individuals
Looking at the killer’s machine gun through out my right purview
Looking at the blood and debris covered on everyone’s faces.
Looking at the gunman’s feet under the stall as he paces.
The guilt of feeling lucky to be alive is heavy
It’s like the weight of the ocean’s walls crushing uncontrolled by levees.
It’s like being dragged through the grass with a shattered leg and being thrown on the back of a Chevy
It’s like being rushed to the hospital and told you’re going to make it.
When you laid beside individuals whose lives were brutally taken.
The guilt of being alive is heavy.