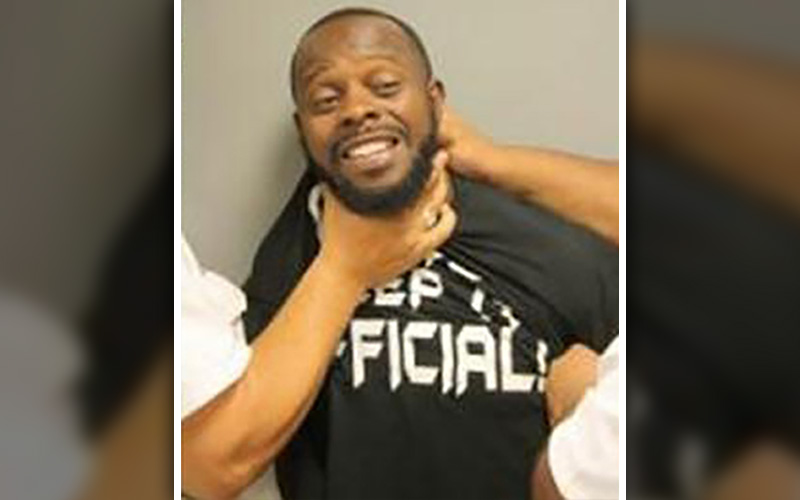 A man from Texas is suing the Harris County Sheriff’s Office for choking him out last year all because he wouldn’t stop smiling while taking his mugshot.

According to court docs, 38-year-old Christopher Johnson was riding his motorcycle home on July 25th 2015 when he was pulled over by Deputy G. Quellhorst and arrested on suspicion of driving while intoxicated.

Johnson was taken to the Harris County Jail, where he posed for at least 10 mug shots while he was being booked. The reason why he had to take so many booking photos is because police were not happy with Johnson’s face. Particularly, his smile.

Apparently, Johnson’s smile and the fact that he wouldn’t wipe it off his face when told to was enough for deputies to grab Johnson around the neck and choke him the hell out.

Court documents said a deputy demanded Johnson stop smiling while taking the pictures. “Man, take the picture right,” the deputy said, according to court documents. Johnson responded, “What are you talking about? This is how I always take pictures.”

Investigators said the deputy continued to tell Johnson to stop smiling. “Well, I’ll tell you what! If you don’t stop smiling, we gon’ make you stop smiling,” one deputy was quoted as saying.

According to court records, three officers held Johnson by the neck for about 30 seconds — making it difficult for him to breathe or smile — as a fourth jail employee snapped the picture.

After the final picture was taken, investigators said Johnson asked to be treated for pain in his neck and was told to sit down and be quiet.

As you can CLEARLY see in his mugshot, Christopher Johnson’s story apparently pans out.

I mean, unless they were “holding his head up because he was drunk” (insert eye-roll here, because that’s literally an excuse they would and could use) it sure does look like he’s being choked and roughed up to me.

And, guess what the fuck the Harris County Sheriff’s Office said in their statement?

The Sheriff’s Office was reportedly notified about the lawsuit Thursday (Jun 9). With the exception of Johnson’s arresting officer, Quellhorst, the department did not release the names of the deputies accused of being involved in the incident.