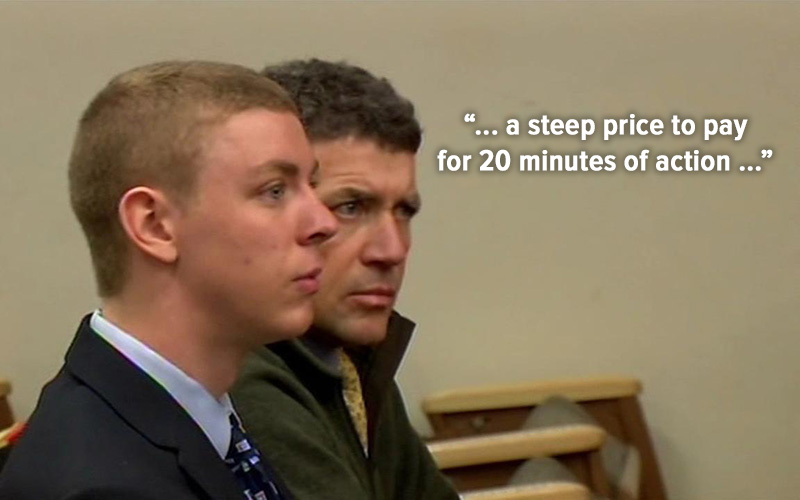 In the document, Turner states that his son is paying a “steep” price for “20 minutes of action.” Many consider Brock’s sentence to be too lenient, especially since prosecutors asked the former swimmer serve at least six years.

#brockturner father: son not "violent" only got "20 mins of action" shouldn't have to go to prison. @thehuntinground pic.twitter.com/IFECJs687b

“The punishment does not fit the crime,” said District Attorney Jeff Rosen. “The sentence does not factor in the true seriousness of this sexual assault, or the victim’s ongoing trauma. Campus rape is no different than off-campus rape. Rape is rape.”

In the letter, Turner also describes how recent events have adversely affected Brock’s life, including his son’s lack of appetite, and the young man being constantly “consumed with worry, anxiety, fear and depression.” (Yeah, the idea of going to prison can do that to a person.)

Turner has his own ideas about what constitutes justice, suggesting Brock’s time would be better spent “educating other college age students about the dangers of alcohol consumption and sexual promiscuity.” Turner fails to even mention the word rape in connection with Brock and downplays his son’s actions as nothing more than an overzealous sexcapade.

The letter was posted to Twitter by Michele Dauber, a law professor at Stanford. Dauber has been instrumental in developing the university’s new and more stringent policies regarding punitive measures when it comes to sexual assault on campus.

The victim drafted her own letter which she read to Brock Turner during his trial. She stated the assault has left her “closed off,” “angry” and “empty.” She also cited the trauma of having her sex life dissected by the authorities.

Turner’s letter attempts to paint his son as the injured party and takes umbrage to the fact that his son will now be a registered sex offender. The sense of self-entitlement is shocking, especially since Judge Aaron Persky gave Brock Turner nothing more than a slap on the wrist due to his age and lack of any priors.

In his decision, Persky stated, “A prison sentence would have a severe impact on him … I think he will not be a danger to others.”

Dan Turner may feel his son has suffered enough, but what about the young woman whose attacker will be back on the streets within weeks?