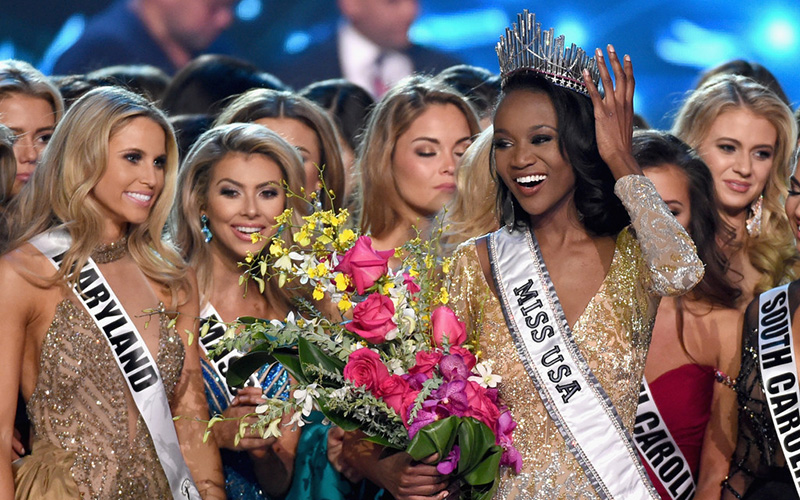 Though with a background in the military, Deshauna Barber is NOT your average Miss USA, and her purpose in joining this year’s pageant was to shatter stereotypes for not only female soldiers, but also beauty pageants.

Below are 7 facts you need to know about Miss USA 2016 Deshauna Barber.

1Deshauna Barber is from D.C. but, as a military brat, she has lived all over the country

Epitomizing the title “Miss America” due to her father’s career in the military, as a child, Barber has lived in many states all over the country, including North Carolina, Nebraska, Minnesota, Virginia, and, finally, Washington D.C. Her dad was deployed to Iraq following the 9/11 terrorist attacks in 2001

2Barber is an Army Officer and IT Analyst

Following in the footsteps of her father, Deshauna joined the Army at the age of 17.

After graduating from Virginia State University with a degree in business management, Barber was commissioned as a Quartermaster Officer in 2011. She is now a Logistics Commander for the 988th Quartermaster Detachment Unit at Fort Meade, Maryland while working full-time as an IT analyst for the U.S. Department of Commerce.

In addition to herself and her father, Barber also has siblings who are in the military. “I consider it to be a family tradition,” she said during a pre-show interview. “It’s something that runs through our veins — patriotism and service for this country.”

Barber is the first-ever military service member to be crowned Miss USA, and one of her goals in participating in this pageant was to break stereotypes. She wrote in the caption of a photo she posted to Instagram last month:

I am ready to break the stereotype for female soldiers and bust through the pageantry glass ceiling that has been laid over the heads of this industry. Time to show that we as women are versatile, strong and can be anything we set our minds to!

In another IG caption just hours before the pageant, she shared:

This is what she told the Washington Post about breaking stereotypes in her pre-pageant interview:

During the pageant, Deshauna was asked about gender equality in the military, and whether the Pentagon’s decision to open up all military combat roles to women “put political correctness over our military’s ability to perform.”

She responded, “As a woman in the United States Army, I think it was an amazing job by our government to allow women to integrate into every branch of the military.” She added, “We are just as tough as men. As a commander of my unit, I’m powerful, I am dedicated and it is important that we recognize that gender does not limit us in the United States.”

Now that she is Miss USA, Barber hopes to use her platform to put a spotlight on the various health issues veterans face when they return home from combat, such as PTSD (post-traumatic stress disorder).

“It’s so important, I know that when veterans and soldiers return from being deployed, sometimes they have those hidden scars that aren’t necessarily physical,” Barber told Fox 5 D.C in an interview. “And I think it’s important to make sure that they have the resources they need to get through PTSD, to get through those mental battles.”

5She is a sorority sister

Deshauna Barber is a member of the Sigma Ghamma Rho Sorority.

Established in 1922 at Butler University in Indianapolis, Indiana and with a membership of over 85,000 women, according to their website, Sigma Gamma Rho’s mission is to “enhance the quality of life for women and their families in the U.S. and globally through community service” and their goal is to “achieve greater progress in the areas of education, healthcare, and leadership development.” The website continues, “Our members, affiliates, staff and community partners work to create and support initiatives that align with our vision.”

The sorority, which has over 500 chapters across the country, posted a congratulatory message to Barber Monday morning (Jun 6).

6She inherited her crown from 2015 Winner, Miss Oklahoma Olivia Jordan

I have so much love for our new #MissUSA and all that lies ahead for [her]. I have no doubt with your passion, your patriotism and your powerful voice, you will change the world. xoxo, former Miss USA

The day before the pageant, Olivia Jordan, wrote on IG that she was “unbelievably grateful for you all and for the most unforgettable year of my life.”

Now that she has been crowned Miss USA, Barber will represent the United States later this year at the Miss Universe 2016 pageant, where she will compete with other women from all over the world to take the crown from Pia Wurtzbach.

In case you forgot, Wurtzbach, a 26-year-old actress from the Philippines, was crowned Miss Universe 2015 last December after host Steve Harvey mistakenly announced Miss Colombia Ariadna Gutiérrez as the winner.