GOSSIPONTHIS.COM TV Tamar is Pissing Off Executives at “The Real” with Her Spin on... 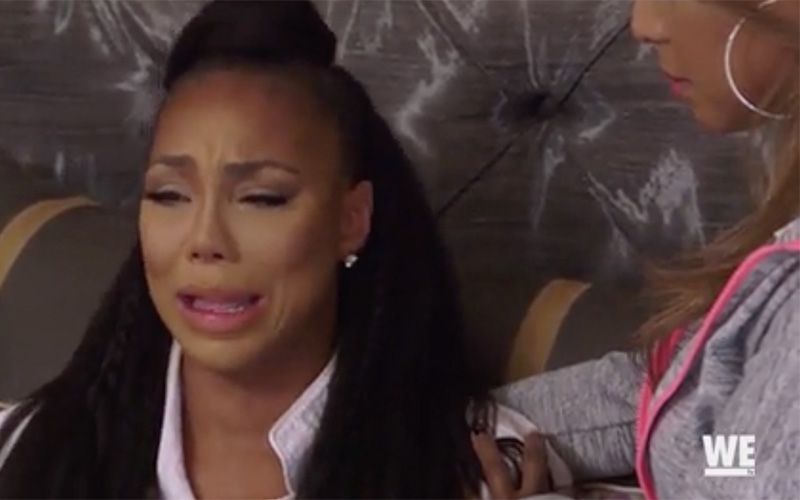 Just when you think Tamar Braxton‘s little firing from her talk show “The Real” couldn’t get ANY messier, we step into the next layer of mess.

After Tamar was unexpectedly given the boot from “The Real,” she put out messy hints on social media that alluded to her having beef with castmates and suffering betrayal at the hands of someone who she once considered a friend.

In a shrewd move of timing and resources, Tamar and the WeTV crew had Tamar re-enact her reaction to her firing for her longstanding reality show, “Braxton Family Values.”

During the scene, Tamar is sitting in bed when her sister Toni walks in. In her best fragile voice and in between cracks in her voice, Tamar explains to her big sister that was she was just told that she was being let go from “The Real” and she has NO IDEA why because she didn’t DO ANYTHING.

Watch the daytime soap-opera-worthy acting and crocodile tears below.

While the little scene and “woe is me” act was cute for ratings, it apparently didn’t go down so well with executives over at her old show as lawsuit threats have apparently been flying after the BFV episode aired, reports the Daily Mail.

Warner Bros fired off legal letters to WE TV about this Thursday’s episode claiming that if anything on the show’s reenactment further disparages The Real or violates Tamar and Vince’s non-disclosure agreement, they plan to pursue litigation.

Warner Bros initially decided to ditch Vince as an executive producer on the series and wanted to have a ‘come to Jesus meeting’ with Tamar one last time to help her keep her job. ‘They had completed a photo shoot for Season three,’ the source said.

The source added: ‘Their intention was not to fire her, but because Vince was dropped as a producer he wouldn’t allow the executives to speak to his wife directly and that’s what pushed the network to not pick up her option either and can her from the show.’

In addition to sending letters to WE TV, Warner Bros. is also threatening to release multiple videos of Tamar imploding on set, as well as the video of her meltdown and cussing out the show’s executive producer.

‘Everyone on set will tell you that her actions that day were reprehensible and the epitome of insubordination. All the cursing and violent language, it was just a chaotic scene that will make Dennis Quaid’s movie set meltdown look like a nursery rhyme session at a daycare center,’ the source said, before adding: ‘It would definitely affect her ability to get work in this business!’

Sources close to The Real believe that Tamar and Vince are trying to portray her as the victim because they need to find a new gig now that they’ve lost The Real.

In a separate statement to Love B. Scott, producers from the show further clarified once and for all that Tamar’s firing had absolutely NOTHING to do with her castmates.

In response to statements made by Tamar Braxton during recent interviews and appearances surrounding her departure from “The Real,” we felt compelled to correct some inaccuracies.

Tamar Braxton’s contract was not renewed for reasons that will remain privileged and private, and that are between her and the Studio. However, we would like to make it crystal clear that Ms. Braxton’s departure from the show had nothing to do with her former co-hosts; any suggestion to the contrary unfairly tarnishes them. As always, we wish Tamar and Vince all the best.

Maybe Tamar should just shut up, cut her losses and move on. Cause the clueless, victim act seems like it has the potential to do more harm than good.

The only celebrity who seems to successfully thrive off of that strategy is Taylor Swift, and Tamar is certainly no Taylor in any way, shape or form.