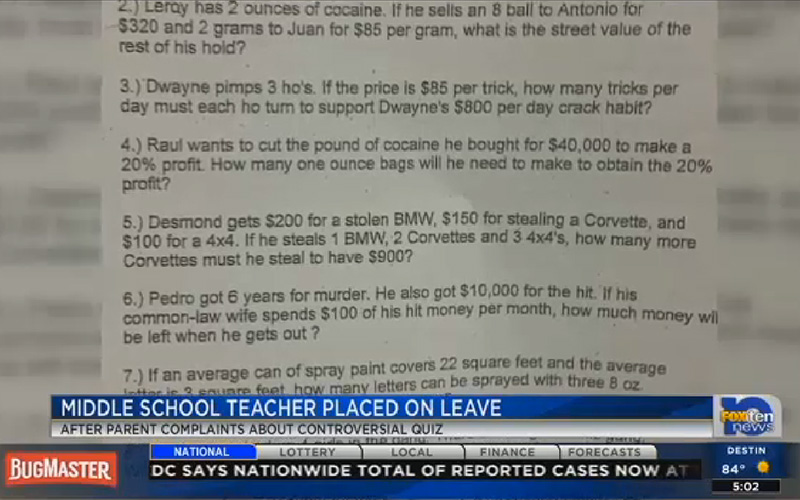 Leroy has 2 ounces of cocaine. If he sells an 8 ball to Antonio for $320 and 2 grams to Juan for $85 per gram, what is the street value of the rest of his hold?

You might be shocked at the question I just posed; maybe even a little amused. Whatever your initial thoughts, this was an actual quiz question given to an eighth grade class.

Mobile, Alabama’s FOX10 News reports that a middle school teacher has been placed on administrative leave after parents complained that their children took a test that many consider inappropriate and culturally insensitive.

The language arts teacher strangely handed out the 10-question math quiz for the students to work on. Some of the students were amused and even questioned if the exam was real. The teacher confirmed, and one student texted a photo of the quiz to his mother.

A local teacher is on administrative leave after parents complain about "racist math" quiz.https://t.co/lOoP7dG1w4 pic.twitter.com/JMRUYZbLeN

Two more questions from the quiz:

We couldn’t make this sh*t up if we tried, folks.

The identity of the teacher has not been officially been revealed. However, students and parents say she is the only language arts teacher at the school and had already intended to retire at end of the academic year.

“We regret this has happened during the last few days of school,” was Mobile County Public School Superintendent Martha Peek’s only statement regarding the matter. A MCPSS spokesperson has handled much of the press surrounding the controversy.

Why an English teacher would supply a math exam is beyond me. But what is truly perplexing is why she would give a test with racist undertones and inappropriate language to a middle school class.

Shockingly, similar versions of the test have circulated since the 90’s. Teachers in California, Texas, and New Mexico have also reportedly faced criticism after giving students the controversial test.