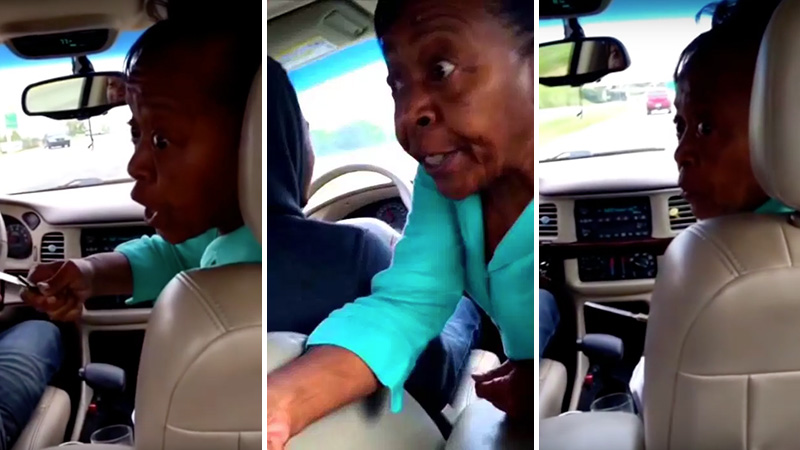 Kids today are disrespectful brats, which is why there are actual people out there who make conscious decisions to not have them.

Do those ill-mannered little hellions deserve to have knives pulled out on them for their unruly behavior? Probably not, but this grandma surely gives no f**ks, and we love her for that.

A video showing a serious lesson on the dangers of disrespecting your elders has gone viral. There isn’t really any context behind the video (we have no idea where or when this was recorded), but it’s obvious that grandma — the star of the clip — is sick and tired of being sick and tired.

“Shut the f**k up!” the gangsta granny yells several times at the start of the clip as a young boy in the backseat laughs hysterically. Apparently, the boy (her grandson) has been rude to her, and whoever is behind the camera (his friend? a family member?) pressed record exactly at the right moment.

Grandma then bends down, reaches into her purse, and then brandishes a knife as her grandson squeals and squirms in the backseat. Gangsta granny unbuckles her seatbelt, and she ignores the driver (another grandson, either the boy’s older brother or big cousin?) as he tries get her to calm down

“Grandma be careful,” the older boy says, but he never tries to actually physically stop her because you know he doesn’t want those problems.

She even let him know that she’s not worried about him telling his mama what happened either. In fact, SHE WANTS HIM TO:

“Go tell her I did it, and tell her why I did it. You heard me? … Talk to me like that again, I don’t care what kind of problems you got. I got one too, got-dammit, I’m crazy too. I’m crazy as a motherf**ker!”

GRANDMA PLAYS NO GAMES, Y’ALL. NONE AT ALL.