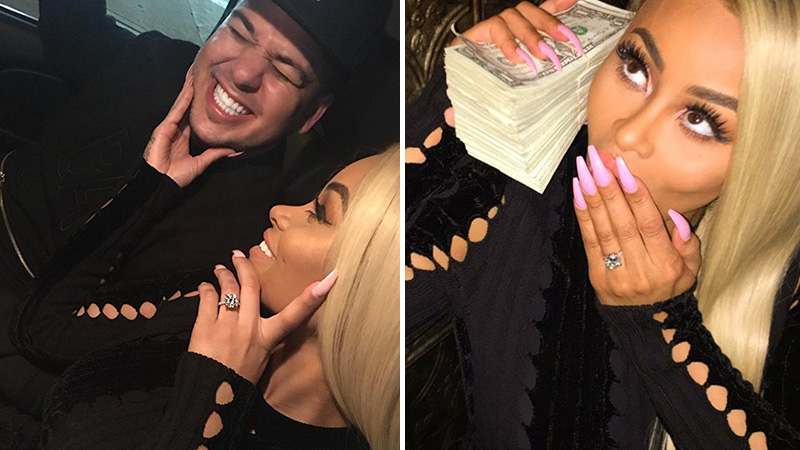 In a move that is certain to make the Kardashian Klan flip their collective sh*ts, Rob Kardashian has taken his relationship with Blac Chyna to the next level.

After just three months of dating, Rob Kardashian and Blac Chyna are now engaged to be married.

Earlier today, Blac Chyna flashed a pretty sizable diamond ring on Instagram, along with the caption “YES !…!…!” leading many to believe that Rob had popped the question.

She then confirmed the engagement with this:

And Rob posted this:

According to E!, the couple celebrated their engagement at L.A. strip club Ace of Diamonds, where she had already been booked to host a party before Rob asked her to marry him.

Three sources close to Blac confirmed the engagement to E! News Tuesday. “They are so happy,” an insider said. “Chyna’s been texting her friends how excited she is!” Rob had asked Blac’s family for their permission before proposing, two sources add.

Her mom, Tokyo Toni, gushed about the engagement via Instagram Tuesday, writing, “Chy and Rob are my favorite two people in the world. They both have shown strength diversity and triumph. These kids are fabulous and both are great role models to young old or children. I have so much respect for this couple and all attached.” As for a wedding date, Tokyo played coy, telling her followers, “To be continued.”

According to one source, Rob bought the ring a week or so ago. “They were serious from the time they started dating,” the source says. “He knew he wanted to marry her.”

It remains to be seen what Rob’s family thinks about his engagement with Blac Chyna — who has a child with Tyga, who currently dates Rob’s youngest sister Kylie Jenner, who is also sisters with Kim Kardashian, who used to be BFFs with Blac Chyna, who is now BFFs with Amber Rose, who has beef with Khloe Kardashian — because Kris Jenner whisked the Kardashian Klan away on a private jet for a “mystery vacation.”

No doubt the topic of discussion right now though is the fact that Rob is literally making the enemy an official family member.

Blac Chyna’s BFF Amber Rose, meanwhile, is over the moon with excitement over the news. This is what she shared on Instagram:

“Congratulations to my Family @blacchyna and @robkardashian!!! Pease don’t let nothing or no one tear u guys apart! I never seen my sis so happy and I couldn’t be more happy for her! Sometimes we find love in the strangest places Lol God Bless you 2! Now let’s get this wedding together so y’all can start making some babies #TrueLove #putaringonitsouknowitsreal #BlacRob.”

The response on Twitter is a mixed bag of emotions, with responses ranging from excitement and congratulations to skepticism and sarcasm.

Meanwhile, some users are pointing how complicated the Kardashian-Jenner family tree has now become. Like, for instance, Tyga is now the uncle to his own son, King Cairo.

After #Blac Chyna engagement to Rob Kardashian. Tyga is now the uncle to his own child https://t.co/NQccRkNbfo

Eh now Rob Kardashian and Blac Chyna are engaged, when they get married wont Tyga be an Uncle to his own son??????????

I think the most confusing part of my day was learning about blac Chyna and Rob kardashian being engaged (excuse me y????)

Blac Chyna getting engaged to Rob Kardashian shows how crazy life with that family is. Tyga is gonna be an uncle to his own kid.

Poor King Cairo. He has such a confusing life ahead of him. Your dad is now your uncle too? And now step mama Kylie is also auntie? WOW.