GOSSIPONTHIS.COM TV “Love & Hip Hop Atlanta” Recap: Mimi Gets Her Groove Back With... 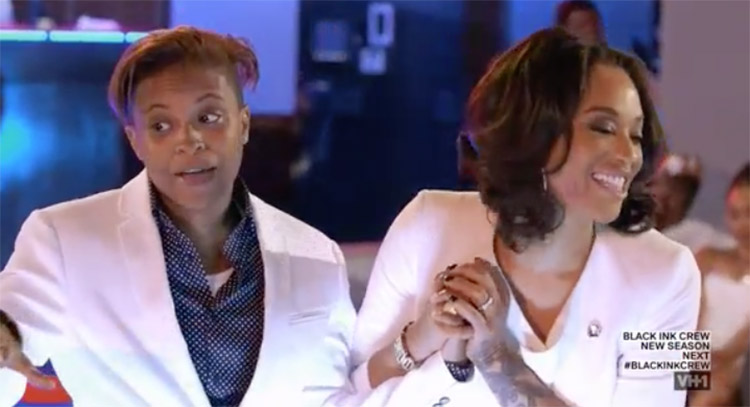 When soldiers came back from the Iraq and Afghanistan wars and attempted to settle back in to their daily lives as civilians, many found that the traumatic experiences of war and terrorism had taken a steep toll on their mental well-being and found themselves struggling with PTSD.

Dating Stevie J and Nikko must have been like going to fight in Iraq and Afghanistan because poor Mimi Faust is clearly suffering from some form of PTSD. That’s the only reasonable explanation for this stunt-queen, self-destructive behavior that makes any kind of sense.

As VH1’s monster ratchet reality show hit “Love & Hip Hop Atlanta” returns for its fifth season, we find out that Mimi is crazy in love with a mystery lover named “Chris.” The gotcha of course is that Chris is not actually a man, but instead, a short, cut, tom boyish butch lesbian with a Justin Bieber-esque haircut. The show’s producers are clearly doing all they can to make this reveal a Jerry Springer-esque “Oh snap!” moment, but honestly it doesn’t quite land for the following reasons:

1.) Mimi reeks of so much desperation that it’s obvious this so-called lesbian relationship is for show. Please believe that after one or two seasons this lesbian saga too shall pass. If you doubt it, Ariane, Mimi’s BFF who also partakes in the lady love, foreshadows this by saying she likes Chris even though “she’s not Mimi’s type.”

2.) The “scorned-woman-turns-to-lesbian-love” switch is a repeat of Erica Mena’s stunt on LHHNY. Mona Scott-Young loves to recycle her tricks and this is a replay of what she pulled off with Erica Mena and Cyn Santana on the New York edition of the show. Like Mimi, Erica got played bad by a bad boy (Rich Dollaz) and decided to take a dip in the lady pond. Unsurprisingly, after that storyline ran for a season or two, Erica Mena quickly resumed dating men and even wound up engaged to Bow Wow briefly.

To the audience, Mimi explains that her decision to switch teams was organic and one born out of a genuine connection with Chris. The whole thing seems faker than the pink wig attached to Jessica Dime’s head but let’s play along, shall we?

Mimi decides to reveal her new lover to her “friends,” Rasheeda, Karlie Redd and Jessica Dime by inviting them to Chris’ birthday party, which apparently is an all-white affair? I guess Mimi thinks she’s P. Diddy now but this definitely ain’t the Hamptons and Mimi is certainly not ballin’ like Mr. Combs.

When Mimi calls Chris out publicly to wish her a happy birthday, Mimi’s gaggle of girls falls out. And then they kissed. So there’s that. Mimi is bumpin’ pussies with a stud. Not sure why Mimi prefers a woman who acts like a man to an actual man, but hopefully Chris treats her modestly better than Stevie and Nikko did. While Mimi is out here in these streets running around with her lesbian boo, Rasheeda has been busy tending to her little shop. I guess she’s given up on her music career (thank God!) and instead getting her Karlie Redd on and focusing on pushing cheap, garbage garments from Bangladesh to the ratchet masses in Atlanta.

Unfortunately, Rasheeda has her hands full because she has installed her stepdaughter and mother at her store, Pressed. As would be expected, her family is taking the job for granted and lazing around, acting unprofessional and just generally doing no good.

Kelsie, Kirk’s daughter, had the nerve to be sitting in a chair with her leg propped up on one of the arms and her iPhone in hand, with headphones in and everything, all while on the clock. Rasheeda is better than me cause that little girl would’ve been fired like Benzino and Althea were from the LHHATL cast if that was my store. But the underlying tension is just set-up for later episodes. The drama that unfolds at Pressed today is all around Scrappy and Momma Dee.

Apparently while the cameras were off, Scrappy called on Rasheeda and Kirk to act as character witnesses in his child custody case with Erica Dixon. But they bailed on him and didn’t show up to court.

Scrappy feels some type of way about it, as he told his mama at the park, when they met earlier in the episode. So Momma Dee heads over to Pressed to confront Rasheeda. Rasheeda feels like Scrappy’s problems ain’t HER problems and Rasheeda’s mama, Miss Shirlene, who of course also had to jump into it, doesn’t understand why Rasheeda and Kirk are the only two people Scrappy could think to call on in this situation.

The two fail to see eye-to-eye but thankfully, nobody gets hurt. This time.

Then, out of nowhere, Momma Dee pulls out a gift bag with hay and arranges a bird’s nest right there on the ground, calling Rasheeda’s mama out for “pushing out a rotten egg” (i.e. Rasheeda).

Meet KK and the New “Scrapp” There are a couple of new faces that have been added to the LHHATL crew and the first batch mostly revolve around a woman named Karen “KK” King and her brood. Like Momma Dee and Deb Antney, KK is a momager and she managed some raggamuffins named Scrapp and Sas of Da Razkalz Cru. Nevermind that we already have a “Scrapp” on the show, now we have another. That won’t get confusing.

KK is the typical momager type: Controlling, overstepping her boundaries as a parent, and highly confrontational.

So she plots with her son’s girlfriend, Tommie, against his baby mama, Tiara.

Honestly, the situation really isn’t that interesting, but somehow, Jessica Dime, who is seriously looking like something that stepped out of “Who Framed Roger Rabbit?” these days, and Karlie Redd get roped into helping Tommie spy on Tiara at her job at the club, where she waitresses. When Tommie catches wind of the fact that Scrapp is still bumpin’ uglies with Tiara she is not pleased. In fact, she spent about 75% of the episode with a nasty frown and a furrowed brow. So of course, Tommie is all doing the runteldat thing with KK but we’ll see where that goes. LHHATL has a history with girlfriends plotting with their boyfriends mamas and failing (See Shay Buckeey and Momma Dee’s attempt to take Erica Dixon down for notes).

More importantly though, why on earth is anyone fighting over Scrapp, who looks like a black version of the GEICO caveman?